There is nothing that stirs up the rancid juices of a conservative sociopath like being fingered as a conservative sociopath. It’s very much the same furious reaction that racists have when you point out that they’re being racist. And this week the American Taliban got their feathers ruffled again by the Department of Homeland Security’s “intelligence assessment” that reportedly “focuses on the domestic terror threat from right-wing sovereign citizen extremists.” 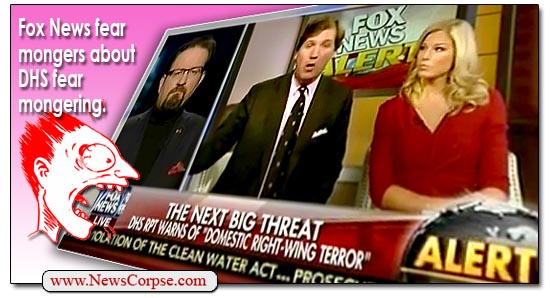 The release of this report predictably ignited a temper tantrum by the hypersensitive rage-meisters at Fox News. They immediately slammed the report as being offensive to the totally rational, peace-loving, icons of harmony that populate the Tea Party and other rightist models of national unity. Why ever would they be regarded as potentially dangerous just because they brag about their arsenals while holding signs that say “We came unarmed – this time.”

Never mind that the report documents a couple of dozen instances of criminal violence by wingnuts in the mold of Timothy McVeigh and Eric Rudolph. And set aside the fact that state and local law enforcement officers, when surveyed last year, cited “sovereign citizen terrorists” as the top domestic terror threat ahead of foreign Islamic jihadis. That’s an understandable and thoroughly logical conclusion coming from the first responders who are often the targets of the anti-government right-wingers. Just ask the families of the two Las Vegas police officers who were murdered by followers of Cliven Bundy, the deadbeat rancher who assembled a brigade of armed protesters to do battle with agents from the Bureau of Land Management.

The zealousness with which Fox News defends violent American jihadis who hate the government (particularly since that black guy was elected) is evidence of their support for extremists, so long as they are extreme in the proper fashion. This response to a perfectly reasonable law enforcement analysis only validates the politicization of national security that Fox engages in. At Fox News they don’t care if a heavily armed NRA “patriot” is parading around the Wal-Mart with assault weapons. But if a black kid with an iced tea and a bag of Skittles is gunned down by a self-appointed vigilante while walking home, then Fox portrays him as a thug who must have been up to no good.

What makes this outburst of outrage even more ludicrous is that the DHS is only doing its job of protecting the American people. They are not playing favorites by drawing attention to extremists on the right. The proof of that is that the feds previously published a report that warned of the potential dangers of left-wing extremists. News Corpse wrote about this six years ago, the last time that Fox News and other wingnut media mouthpieces went bonkers over a DHS report. That article contained a link to a security analysis that said…

“Left-wing extremism is ‘alive and well’ both in the US and internationally. … There are individuals and organizations within the U.S. who maintain the same ideology that resulted in the growth of left-wing terrorism in this country in the 1970s and 1980s … and new leaders and groups are emerging.”

Good luck trying to find any reporting on Fox News about that study. While there are a few mentions of left-wing extremism on Fox, they are conspicuously thin and refer primarily to animal rights activists and environmentalists – a scary bunch of bloodthirsty hooligans if there ever were any.