The auto-outrage detector of the right-wing establishment is blinking fiercely over an offhand remark made by President Obama yesterday. The President was delivering a detailed address about the Iran nukes deal in the hopes of persuading Congress to ratify it. He covered specifics including the prohibitions that would be imposed on Iran, the provisions for any breach of the agreement, and the consequences of not passing it in Congress. However, the entirety of Obama’s remarks were summarily dismissed by his wingnut critics so that they could hyperventilate over this:

“It’s those [Iranian] hard-liners chanting ‘death to America’ who have been most opposed to the [nukes] deal. They’re making common cause with the Republican caucus.” 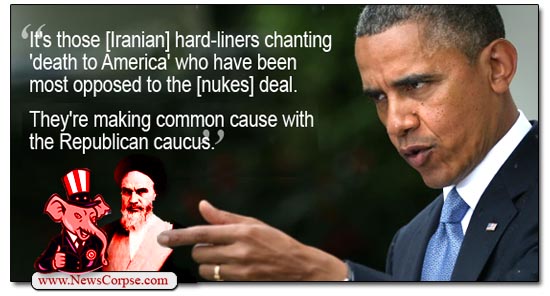 That’s right. The President correctly pointed out that the hard-liners in the Republican Party, in opposing the nuke deal, are taking precisely the same position as the Ayatollahs in Iran. Granted for different reasons, but the factual basis is undeniable. Much of the motivation on the part of the GOP stems from their determination to oppose anything that comes out of this White House, no matter what the merits. And this isn’t the first time that Republicans and other conservatives in politics and the press, have sided with our enemies to satisfy their own political aspirations. Here are a few examples:

There are other areas of agreement between the American Taliban and foreign extremists. In fact, much of the agenda of the Islamic radicals is identical to the platform of the Republican Party. They both believe that religion should be the foundation of government. They are both virulently anti-gay. They would both enforce a submissive role for women who must not be permitted to make decisions about their own bodies. They both have a perverse obsession with guns. They both want to use education for indoctrination. They both refuse to accept settled questions of science. And they both advocate overthrowing the secular governments that they despise.

Considering the array of similarities between these groups it is surprising that the right would make such a big deal about Obama’s comments. It only brings additional attention to the policy positions that they share. And the more they gripe about it the more people will be exposed to their repulsive ideological harmony.

3 thoughts on “Obama’s Right: Ayatollahs Are Making Common Cause With Republicans”