Donald Trump, the media-designated front-runner for the Republican nomination for president, is said to have attained this status due to his straight talk and authentic style of connecting with GOP voters. Of course, Trump’s alleged lead is a myth that is exacerbated by shallow punditry and the media hunger for ratings. 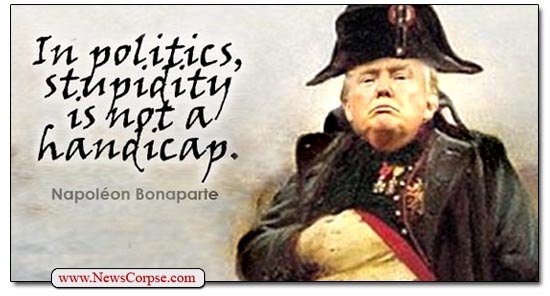 Trump has never led more than a small flock of GOP loonies, with 75-80% of poll respondents choosing other candidates. And he has consistently had the highest unfavorables of any candidate, Republican or Democratic. The only reason that Trump is ahead of his rivals now is that there are so many of them. When the roster is whittled down the remaining candidates will all be beating Trump.

As for his so-called plain speaking appeal, Jack Shafer at Politico put Trump’s rhetoric through the Flesch-Kincaid test where Trump scored at the third grade level. That’s probably still somewhat higher than most of his Tea-vangelical supporters. And despite his compulsion to repeatedly remind everyone how smart he is (something actual smart people never need to do), his public utterances invariably contradict him. This morning, for example, Chuck Todd asked Trump from whom he would get advice on the military were he president. Trump said that “I watch the shows,” referring to the Sunday morning news programs in the same way that fans of soap operas refer to their “stories.” He’s still in Reality TV mode.

Nevertheless, with so much of the media spotlight being cast on Trump, it is important to put his life in context. Particularly with regard to his early childhood development that reveals with stark clarity how he came to be the person he is today. As the son of privilege, little Donny was pampered and fawned over by his wealthy parents who set him up in business and eventually bequeathed him a couple hundred million dollars (which his poor business skills squandered). And to further flesh out Trump’s formative years, News Corpse acquired this exclusive video of a young Don expressing himself in much the same way that he does today.

The resemblance is obvious. And it doesn’t take much effort to chart the path from Trump’s greedy Narcissism as a juvenile to the political hogwash he espouses now. What’s more, those positions – from immigration, to taxes, to Iraq/Iran, to reproductive rights, to marriage equality, to Climate Change, to guns, to health care – are completely in line with with the Republican Party that he represents. So even when he is ultimately laughed off the stage, the GOP regulars will soldier on with the same agenda, albeit somewhat less foolishly articulated (not much, but somewhat).