Confirmation of the relentless idiocy of the Republican electorate continues to unfold as the primary season heats up. With each new day there are fresh examples of the trademark asininity that is emblematic of America’s wingnut demographic. 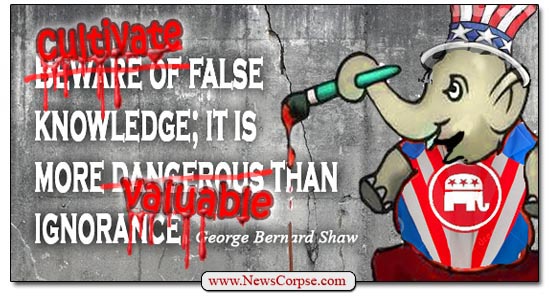 The latest revelation comes from a survey by Public Policy Polling that provides a profile of the GOP’s current voter base. It’s a sad picture of a sector of the population that is hopelessly lost and consumed with blind hatred. Here is what PPP had to say about their survey results:

“Our new poll finds that Trump is benefiting from a GOP electorate that thinks Barack Obama is a Muslim and was born in another country […] 66% of Trump’s supporters believe that Obama is a Muslim to just 12% that grant he’s a Christian. 61% think Obama was not born in the United States to only 21% who accept that he was.”

So 40% of Republicans overall (not just Trump supporters) think that Ted Cruz was born in the U.S. (He wasn’t. He was born in Canada). But 51% of the same meatheads think that Obama wasn’t born in the U.S. (He was, of course, born in Hawaii). Meanwhile, 54% of Republicans (and 66% of Trump’s supporters) also believe that Obama is a Muslim, despite the fact that they criticized him mercilessly for all the years that he was a member of the Trinity United Church of Christ led by the now infamous Rev. Jeremiah Wright. Whatever you think of Wright, there is no question that he did not preside over a mosque.

To make matters worse, Trump supporters are comfortable with his assertions that he is a devout Christian even though he says that he has never asked God for forgiveness. Due to his spiritual perfection he said “Why do I have to repent? Why do I have to ask for forgiveness if you’re not making mistakes?” I thought that Christians believe there was only one perfect person and he died on a cross a couple thousand years ago. Is The Donald the Second Coming? Additionally, Trump was unable to cite a single verse from the Bible when asked last week. And the pastor of the Church to which he said he belongs denied that he is an active member.

But this isn’t about Trump. It’s about the whole of the Republican electorate whose absence of easily available knowledge borders on clinical dementia. It would be bad enough if they were merely ignorant of common facts. But it’s much worse than that. These people are convinced of things that are provably false. And as George Bernard Shaw said “Beware of false knowledge; it is more dangerous than ignorance.” Which begs the question, how did Shaw know about the Tea Party so many years before it existed?

10 thoughts on “The Unbearable Dumbness Of Being Republican”