The list of things that are Obama’s fault just keeps getting longer. You have to wonder how he has managed to get so much done in so short a time. After all, conservatives have blamed Obama for everything from riots in Ferguson, MO, to California’s drought, to Ebola, to Hurricane Katrina (No, really). And that happened three years before he was inaugurated. He is to blame for high gas prices that hurt consumers, as well as for low gas prices that hurt oil companies. They blame him for increased immigration (which has actually gone down), and for the rising number of abortions (which are declining).

It really doesn’t matter what the subject is. Conservatives will spin it as evidence of America’s doom and blame Obama for it. And if you need another example, look no further than Fox News, where today they ran a story with the headline “That Drowned Syrian Boy On The Beach Is Obama’s Fault.” Because, of course it is. 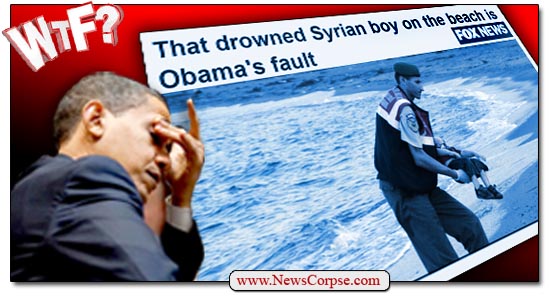 Fox News contributor Erick Erickson is the one assigning the blame on this occasion. He has to stretch mightily to justify his ludicrous opinion that the responsibility for the death of a child refugee from Syria rests on the President’s shoulders. He does this by twisting the facts beyond all recognition and inventing motives that aren’t supported by reality. The sad story began when the boy’s family, along with thousands of others, fled the oppression and atrocities perpetrated by ISIS in Syria. Erickson viewed that situation as the “direct result” of Obama’s alleged pride and cowardice.

Erickson: “ISIS only became a thing when the White House, out of pride and arrogance, decided it was better to placate the left by withdrawing all troops from Iraq rather than help the Iraqis maintain their stability.

“A young boy has died, washed up on the shores of Europe. His picture has shocked the world and his death is direct result of Barack Obama fleeing the Middle East, tail tucked between his leg, so he could pridefully say he ended a war he never wanted.

“The boy is dead because Barack Obama chose to abdicate American leadership in the world.”

Apparently Erickson either doesn’t know, or is deliberately lying, about the circumstances that led to the withdrawal of American troops from Iraq. The truth is that a “Status of Forces Agreement” was negotiated by the administration of George W. Bush that called for complete withdrawal by the end of 2011. The Obama administration attempted to extend the agreement, but the Iraqis were opposed to any extension so Bush’s deadline was carried out.

Since the withdrawal date was not chosen by Obama, it can hardly be attributed to him as placating the left or resulting from his pride and arrogance. He didn’t “flee” the Middle East. He complied with the binding agreement of his White House predecessor. If Erickson is looking for someone to accuse of abdicating leadership, then he should be looking at Bush.

Furthermore, Erickson’s insinuation that Obama was responsible for the rise of ISIS is just as faulty as his understanding of international treaties. Many of the soldiers who formed ISIS were former officials and military operatives of Saddam Hussein’s Bath Party. They were only available to start their radical Islamic army because Bush’s operatives in Iraq prohibited them from having any role in the new Iraqi government. That move turned them into rebels who eventually aligned with ISIS leader Abu Bakr al-Baghdadi.

Nevertheless, Erickson flatly stated that “That little boy would not have died had Barack Obama stood strong in Iraq. […] That dead child is Barack Obama’s fault.” But that opinion is so much more than merely wrong. It is contrary to the facts. It is slander against Obama. It is absolution to ISIS, the real perpetrators of so much death and misery. And it is perversely exploitative of a tragic loss of innocent life. However, it is exactly the sort of despicable smear campaign that Erickson, and his comrades on the right, and Fox News, have been engaging in for at least the last seven years.

10 thoughts on “Fox News Headline: That Drowned Syrian Boy On The Beach Is Obama’s Fault”