The decline of CNN has been in progress for several years now. It is a network that is struggling with an acute personality disorder. It wants very badly to emulate the ratings success of Fox News, but it has no idea why Fox is popular. They seem to think it has something to do with presenting a conservative slant on the news. But that is not how Fox became king of the cable news hill. 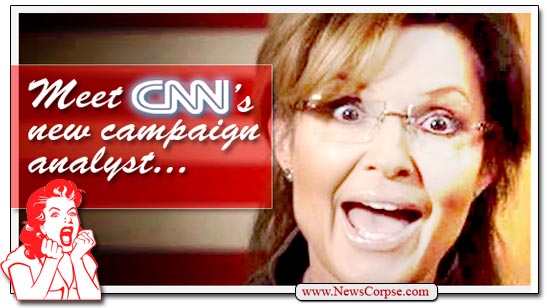 First we have Sarah Palin. That’s right, having been ditched by Fox News, CNN is throwing her a life preserver and bringing her aboard to provide campaign analysis on this Sunday’s “State of the Union.” It’s hard to imagine what insight they think she will bring to the discussion on presidential politics. Her own experience was fraught with embarrassing episodes that only demonstrated how woefully ill-prepared she was for public service at that level. And since then she has only succeeded in distinguishing herself as an ignorant hack with negligible comprehension of the issues that face the nation. Nevertheless, CNN has tapped her to toss her word salad ravings on their network’s signature political program.

Secondly we have Hugh Hewitt, a starkly partisan wingnut who will be featured on CNN’s Republican debate this month. CNN could have selected actual journalists to pose questions to the candidates, but instead they picked only a stalwart Republican radio talk show host (and no one from the left) who will join CNN’s Jake Tapper.

Of course, conservatives are capable of asking tough questions when they want to. However, when they do they will be insulted and dismissed by the candidates and the GOP constituents. Just ask Megyn Kelly. Hewitt himself is taking heat for an interview he did with Donald Trump that demonstrated how ignorant Trump is on foreign affairs. Typical of Trump, he is now hammering Hewitt for what he calls “gotcha” questions. [Note: To Republicans, gotcha questions are any question they are too dumb to answer] In this case, the real problem for Trump was not whether he had been ambushed, but that his answer was at first a lie, followed by obvious ignorance. Check out the first 30 seconds of this video:

Notice how Trump hesitates and stretches the word “Yeessss” when answering whether he was familiar with Quds leader, Gen. Soleimani. Then he adds “Go ahead. Give me a little…go ahead tell me.” Clearly he was lying when he said he knew who Soleimani is and he employed a childish dodge in order to get Hewitt to inform him. That was confirmed when Hewitt told him that Soleimani “runs the Quds forces,” and Trump responded by saying that “the Kurds had been horribly mistreated by us.” Hewitt immediately corrected him, but Trump continued to dissemble. Why would he bring up the Iraqi Kurds in response to a question about the Iranian Revolutionary Army (Quds)? Well, his explanation later in the day was that he misheard Hewitt and thought that Hewitt said “Kurds.” But if that were true then he was asserting that Soleimani was the Kurdish leader (who is actually Masoud Barzani), proving that he doesn’t know anything about the Quds or the Kurds. In the end, Trump’s answers are proof that his ignorance is insufficient to cover up his lies.

To make matters worse, Trump was asked a question about Soleimani by Bret Baier during the first GOP debate on Fox. His answer then also showed that he had no idea who Soleimani is. And after having been queried on that exact subject during a critical debate he never made an attempt to educate himself.

The fairness and degree of difficulty of Hewitt’s questioning notwithstanding, there is still a problem with CNN placing an overtly partisan person on the panel with no balance. Can you imagine Fox News having a GOP debate and getting Rachel Maddow to moderate? And this isn’t a first for CNN. In the 2012 election cycle they co-hosted their debate with Tea Party Express, an organization that was even snubbed for their corruption within the Tea Party community.

What CNN is doing with both Palin and Hewitt can only degrade their teetering reputation further. If there is one thing that American media doesn’t need, it’s another Fox News. The first one is already doing a stellar job of misinforming the public and advancing the agenda of the Republican Party. What’s more, emulating Fox has done nothing for CNN’s ratings. Why should it? Viewers who are in the market for dumbed-down histrionics, Democrat bashing, and a steady diet of right-wing falsehoods, already have a proven provider.