For those of you who are unfamiliar with Todd Starnes, he is Fox’s Christianist Ayahtollah and host of the webcast “The Dispatch.” He is primarily known for spinning fables about the alleged persecution of America’s oppressed majority Christians. In most cases he invents the stories himself and provides no independent corroboration. And there is generally a stench of overt racism wafting from everything to which his name is attached. 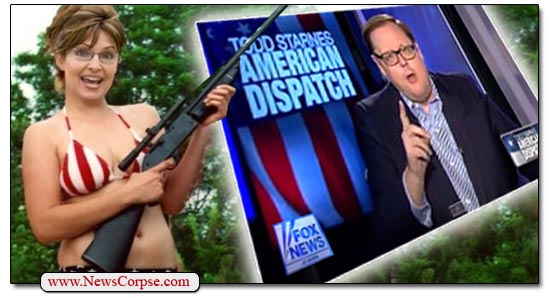 Take for example the time that Starnes reported on a five year old girl whose father claimed she was prohibited from praying in her school’s cafeteria. It turned out that the girl’s father was the VP of Sales for his publisher and he had a book that was just about to be released. There was no evidence that the incident ever occurred and Starnes failed to disclose his close personal relationship with the allegedly abused family. Starnes has a resume of dishonesty that has hounded him throughout his career. Which, I suppose, is what makes him such a perfect employee for Fox News.

Starnes latest outrage involves the selection of the new Miss America. He took to his webcast (video below) to rhetorically ask “Did Miss America Judges Shoot Down Pro-Gun Contestant?” Starnes asserted that one of the contest’s runners-up, South Carolina’s Daja Dial, had been robbed of her victory because her answer to a question on assault weapons didn’t call for banning them, as the pageant’s overlords wanted, according to Starnes. He said…

“It was quite a night on the boardwalk where a distinguished panel of left-wing judges tested the ladies intellect on a number of the most pressing issues of our day. […] Miss South Carolina turned out to be one of the few ladies who refused to kowtow to the judges agenda, shooting down an anti-gun question by saying she opposed banning firearms. Needless to say, the pride of the palmetto state did not win. Liberals frown on pistol-packing beauty queens.”

Left-wing judges? Where Starnes gets that idea from is never revealed. Nor does he explain how any of the other candidates “kowtowed” to some imagined agenda of the liberal beauty queen cabal. In fact, the panel of judges included a country singer, a Disney star, an investor, and the widow of “American Sniper” Chris Kyle. None of the judges could plausibly be characterized as liberals. But what makes Starnes’ bitchfest so strikingly stupid is that the contestants who gave answers that liberals might agree with also failed to get the crown. For instance:

It is worth noting that all three of these contestants were from conservative, southern states and gave impressive, well-reasoned, liberal answers. And they all lost despite Starnes’ insistence that the pageant was rigged in favor of liberals. If Starnes’ theory was correct, one of these contestants would be Miss America today. Instead the winner was Miss Georgia, Betty Cantrell, who was handed a non-political question about Patriots quarterback Tom Brady and his involvement in Deflategate (she thought he cheated).

Oddly enough, this isn’t the first time that Starnes whined about his preferred lady being passed over in the Miss America pageant – and for the same reason. Two years ago Starnes was infatuated with Theresa Vail of Kansas, but she lost to a beautiful, talented Indian-American from Syracuse, New York, Nina Davuluri.. Starnes responded with a noxious blast of racism in tweet saying that…

Of course she did. She is a white, Christian, soldier. How could she lose to a dark-skinned, Hindu, with a funny name, who could not possibly represent American values? In another tweet Starnes attributed Vail’s loss to her being a gun-toter. He really is obsessed with women and guns.

When Starnes isn’t slobbering over well-armed beauty queens, he is fretting about gays threatening the sanctity of marriage, and pagans defiling America’s Christian foundations. He is as deranged as any religious extremist and holds that his faith is superior to that of anyone who would dare to disagree with him. His views are not only ignorant and riddled with falsehoods, they are dangerous. And Fox News gives him a platform to spread his bile to an eager and dimwitted audience.