If you’ve been wondering why you’re having trouble understanding Quantum Mechanics, or conjugating Spanish verbs, or following Sarah Palin’s logic, Bill O’Reilly has the explanation: You’re just a stupid American. 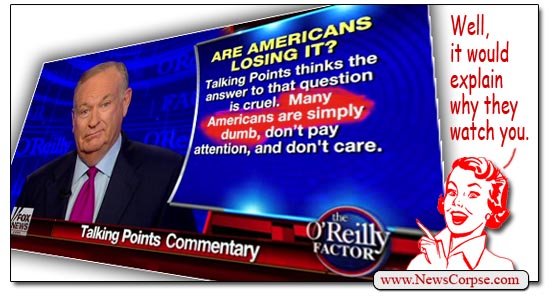 That’s right. According to the Sage of Fox News, “Many Americans are simply dumb.” And that’s not some lefty mischaracterization, or a soundbite taken out of context. It’s a direct quote (video below). O’Reilly was discussing a recent NBC/Wall Street Journal poll that showed that 62% of respondents believe the nation is on the wrong track. Not surprisingly, O’Reilly agreed because, in his view, the economy is soft (it’s booming) and earnings are stagnant (they’re at record highs).

What O’Reilly was dumbfounded by was that, despite the public’s dissatisfaction with the nation’s direction, the poll also showed that Vice-President Joe Biden, if he were to run for president, would beat every Republican he was matched against. While he didn’t bring it up, the same is true in most cases for Hillary Clinton and Bernie Sanders in many polls. But O’Reilly just couldn’t grasp how this could happen. He thinks that if polls show that Americans express an affinity for Democrats like Biden then “Americans are losing it.” He laughingly asked “Why would you vote for him?” And then he provided the answer:

“Talking Points believes the answer to that question is kind of cruel. Many Americans are simply dumb. They don’t know what’s going on. They don’t pay attention. They don’t care.”

So there you have it. If you don’t have the same electoral preferences as Bill O’Reilly, you are obviously a lazy, uncaring, idiot. And especially if you have a positive impression of President Obama, or anything associated with his administration, you’re probably crazy. It’s a viewpoint that exposes the shallowness of O’Reilly’s thinking. He apparently is incapable of entertaining the notion that Americans think the country is on the wrong track at least in part because of Republican obstructionism in Congress rather than any dissatisfaction with the President. And that’s a more likely scenario since most polls show that Obama and the Democrats are held in higher esteem than the GOP. It’s not even close. Obama currently has a 48 percent approval rating, compared to 14 percent for Congress.

This isn’t the first time that O’Reilly has put his contempt for the American people on display. Last year, in a similar response to a poll that he couldn’t comprehend, O’Reilly complained that…

“The harsh truth is that many of us are blatantly ignorant and lazy. We simply will not pay attention to the world around us. We get our information from other people, who may be as dumb as we are.”

Once again, O’Reilly’s definition of ignorant was tied to support for our president. Actually, since he used the inclusive pronouns “we” and “us” he isn’t far off from the truth. So long as he’s referring to himself, the terms “ignorant, lazy” and “dumb.” are entirely appropriate. But he shouldn’t lump the rest of America into the same group. He did much the same thing when he demeaned American voters saying that…

“Informed voters will not be swayed by media coverage, but millions of Americans are simply uninformed.”

This pattern of disrespect for the intelligence of the American people is unmistakable. But it’s even more galling coming from one of the most flagrantly ignorant pundits, with a long record of being a pathological liar. However, his audience won’t hold any of this against him because they believe that they are part of a privileged class of knowledge holders in whom the future depends. A tenet of the right contends that conservatives have a unique intelligence that escapes the rest of society. Only they have access to the universal truths that are being suppressed by the so-called “liberal” media. And, consequently, they are not stupid, they are special. And they are the disciples of America’s saviors. God help us all.