Last night the Republican Majority Leader in the House of Representatives (and prospective future Speaker), Kevin McCarthy, revealed what many people already knew about the GOP’s investigation into Benghazi. And contrary to some characterizations in the press, it was not a gaffe. McCarthy openly bragged to Sean Hannity of Fox News that he helped to orchestrate an anti-Hillary Clinton campaign by forming a Select Committee To Politicize Benghazi. It was, and still is, a repulsive endeavor that dishonors the dead and exposes the self-serving immorality of the Republican Party. 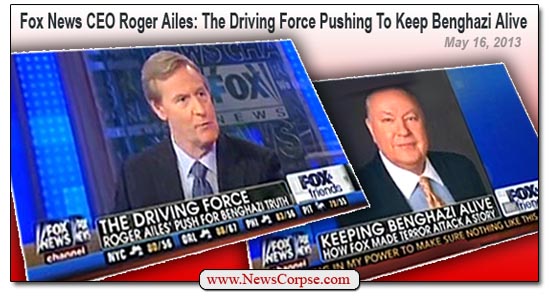 However, McCarthy wasn’t the first to proudly disclose the rank partisanship of the phony Benghazi probe. Two years ago Fox News congratulated themselves on their dishonest Benghazi coverage with particular praise for Fox CEO Roger Ailes. Steve Doocy of Fox & Friends said that…

“Fox News has been doing this story from the get-go. And the mainstream media, the Daily Show, has mocked us for covering Benghazi. And now everybody else is catching up. It’s been a story they’re realizing. One of the reasons we’ve followed it is Roger Ailes, our chairman and CEO. […] Had Roger and Fox News not pushed this story the White House would have just left it in the dust.”

“Roger Ailes spent decades as a professional Republican consultant before being tapped by Rupert Murdoch to run Fox News. Ordinarily media executives do not interfere with the operations of their editorial departments, but such journalistic ethics have never been a part of the Fox News mission. Thus we see their CEO openly shaping news coverage, even influencing policy, and getting praised for it on the air by his employees.”

And in a separate article on the same subject:

“Neither Boehner nor Gowdy have any interest in getting to the bottom of anything. Their statements and actions for the past year and a half show that they are only interested in politicizing a tragic loss of American lives. Having failed to uncover even a sliver of evidence of any wrongdoing, Boehner is, in effect, insulting his own colleagues in Congress (i.e. Darrell Issa) who have been conducting pseudo-investigations without producing the hoped for “smoking guns” with which they could continue their campaign of political slander. […]

“It is a desperate attempt to dig up some political mud to throw, to tarnish the prospective presidential candidacy of Hillary Clinton in 2016, and to salvage Boehner’s sinking reputation with the far-right fringe of his party whom he needs if he wants to be Speaker in the next session of congress.”

So McCarthy didn’t actually reveal anything new. He was merely corroborating what Fox News had admitted years ago: That they were the driving force keeping Benghazi alive. The arrogance they display with on-air graphics confessing that they “made terror attack a story” in response to a “push” by their CEO, is unprecedented.

Furthermore, that arrogance is matched by Republicans in Congress who obediently complied with the demands by Fox News to impanel a select committee. To put it in perspective, Republicans allocated more money to the phony Benghazi Committee (over $3 million) than to either the Intelligence Committee or the Veterans Committee, which deal with matters that have much more far-reaching impact on the nation’s citizens and security.