Culture Warrior Bill O’Reilly is on the warpath again. As usual, the battle lines are drawn around an ego so big it can be seen from space. He devoted a segment of his Friday night program to the “Villains” at Media Matters who he described as “an outrageous propaganda website, a hate site.” An inattentive observer could be forgiven if he thought that O’Reilly was talking about Fox News, which better fits that description. 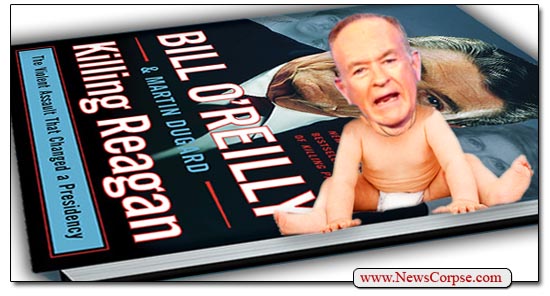 O’Reilly and his guest, Fox Business Network’s Stuart Varney, lit into Media Matters with a vicious, foaming-at-the-mouth glee. They never actually said what they were so riled up about. Generally such a display of animus is prompted by a critical article or a disparaging public statement. But the furious Foxies didn’t offer a single example of a recent atrocity by Media Matters or any other reason for their drooling disgust. They simply hauled off on a manic rant and demanded that the watchdog group’s tax-exempt status be revoked.

O’Reilly: This is not a group that deserves this tax free status. What can someone do to make the IRS revoke it?
Varney: Okay, an individual could file one of these forms with the IRS. It’s form 13909. It’s the tax-exempt organization complaint referral form. Simple form. Fill it out, complain, say what your beef is with Media Matters, and you can complain. That’s how you do it.

See how easy it is? Just say what your beef is. Even though O’Reilly and Stuart weren’t able to, you’ll come up with something. Not that it matters. This is a tactic that Fox News tried four years ago. They made a full court press to enlist their viewers to complain to the IRS about Media Matters. It was promoted for weeks on multiple programs by the network’s biggest names, including Bret Baier, Charles Krauthammer, James Rosen, Ann Coulter, Dick Morris, Bernie Goldberg, Keith Ablow, Jon Scott, and of course, O’Reilly. They posted the IRS complaint forms on Fox Nation with instructions that encouraged filers to lie. They even had one of their own contributors, former Bush lawyer C. Boyden Gray, file his own complaint.

For an in depth examination of just how obsessed Fox News is with Media Matters, see:
Media Matters Has Fox News Scared And Desperate

After months of this charade the result they achieved was a big fat nothing. It’s not unlike the current investigations in Congress, hyped feverishly by Fox News, over Benghazi, Planned Parenthood, and Hillary Clinton’s email. Every inquiry into these subjects has produced complete vindication for the political targets of Fox and the right, but that hasn’t stopped the persecutors from persisting. So it’s no surprise that O’Reilly would dust off this hoary contrivance to hammer away again at his old enemy.

So why is O’Reilly dredging up this old story, and why now? The answer sneaked in at the closing of the segment as he teased the next segment saying “The Factor Tip of the Day: Attacking Killing Reagan. Wow. Wait til you hear this.” If you were bored enough to wait you would have heard O’Reilly whine about some criticism of his new book “Killing Reagan.”

O’Reilly: “A published report says a group of Reagan loyalists are organizing to attack the book. We know these people. They threatened me and Martin Dugard [the co-author] even before we put the book out.”

Indeed, there was a published report. It appeared in the Washington Examiner and was later reported by Media Matters, which O’Reilly failed to mention for some reason. The report identified several people close to Reagan who dismissed O’Reilly’s book as “garbage” and “total BS.” So obviously Media Matters should have its tax-exempt status revoked.

Did the story in Media Matters spur O’Reilly to suddenly relaunch this campaign against them? Who knows? Media Matters has been a thorn in his side for a long time. Earlier this year they published the ebook “Killing Truth” that detailed many of the lies O’Reilly told about his alleged combat duty. And they are a constant source of irritation to Fox News due to their annoying habit of exposing Fox’s journalistic failures. But the fact that O’Reilly went after them just a few hours after the negative report on his new book was posted suggests that it had something to do with his decision.

For a taste of the insane obsession that Fox News has with trying to politicize the tax-exempt status of Media Matters, watch this 2011 video. And you may also enjoy this one showing the depth of the hatred Fox has for Media Matters.