It’s bad enough seeing Christianist extremists congregating outside of funerals for soldiers with signs declaring that God hates them, but now the disciples of the NRA have taken to using the same tactics employed by Westboro Baptists crackpots to advance their agenda in Roseburg, OR, the site of last week’s tragic massacre at the Umpqua Community College. And these miscreants were eagerly abetted by Fox News. 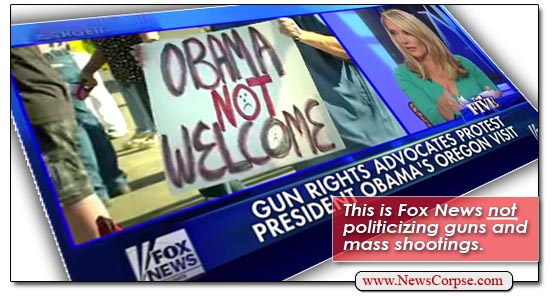 The occasion for the protest in Roseburg was a visit by President Obama to console the families of the victims. Despite the President’s remarks a few days ago about advocating increased political pressure to get Congress to do something – anything – to address the continuing problem of gun violence, there was nothing political about this visit. The press was not even permitted to attend the family sessions with the President. He made a brief statement afterward that avoided any hint of politics.

Nevertheless, Obama was met as he arrived by a motley band of malcontents with bitter messages aimed at driving the President out of their neighborhood. Signs carried an array of derogatory remarks including “Obama Not Welcome,” “Go Away,” “Go Back To Kenya,” as well as a flurry of confederate flags and the Tea Party’s Gadsden flag. The Westboro freaks would be proud. And yet this is the behavior of people who complain about politicization of the issue. What’s more, had Obama declined to go to Roseburg the same people would have criticized him for not caring.

On Fox News they covered the protesters extensively. As apparent in the graphic above, the protests were overtly political, identifying them as “Gun Rights Advocates” rather than mourners. Fox aired multiple on air interviews with the anti-Obama Roseburg residents. For some reason they were unable to find any residents to interview who were grateful that the President would join them in this time of grief. Other news networks didn’t have that problem. And the disingenuous cries of politicization were abandoned when it was Fox News personal engaging in it.

For instance, on The Five, co-host Eric Bolling waxed political by quoting what he said was a portion of Obama’s statement wherein the President said that “we have to work on these rights,” a reference to the 2nd Amendment. However, Obama never said anything remotely similar to that. Fox viewers, of course, will now be forever certain that he did. Then Greg Gutfeld not only hit the President on guns, but tied it to abortion in a perverse analogy that defies reason. He said that…

“The gun argument and the abortion argument are complete mirrors of themselves. The left thinks that the right is using the Planned Parenthood videos to ultimately ban abortion. The right thinks that the left is using mass shooting in an effort to get rid of the 2nd Amendment. So they’re both the same.”

No, they are not even a little bit the same. If the left thinks that the right is using the Planned Parenthood videos to ultimately ban abortion it’s because the right explicitly tells them that that is what they want to do. The right is not the least bit shy about declaring their intention to ban all abortions. On the other hand, the right has no reason to believe that the left is using mass shootings to get rid of the 2nd Amendment because there has never been any effort by the left to do that. In fact, the left is very clear that they merely want to make it more difficult for particularly dangerous weapons to get into the hands of people that ought not to have them.

For the past seven years of the Obama administration, alarmist nuts at the NRA have been screaming about the imminent threat of Obama’s plot to disarm America. Yet there has never been a single bill passed, or even drafted, that would do any such thing. The whole campaign is designed to stir up irrational fears of imaginary tyranny. And that is precisely what is happening today with Fox’s coverage of the Obama protesters in Roseburg. Because to the NRA-theists, losing 28,000 lives a year to gun violence is just the price we have to pay for having access to any kind of weapon, any time, by anyone.