To begin with, it’s not particularly a revelation that Fox News is a constant and unabashed purveyor of lies and disinformation. However, ordinarily they do at least try to obscure their dishonesty in a stew of distorted details, unsupported assertions, and/or mangled misrepresentations of “facts.” But in today’s headline posting on their Fox Nation website they went further than usual to invent a disparaging allegation against Hillary Clinton. 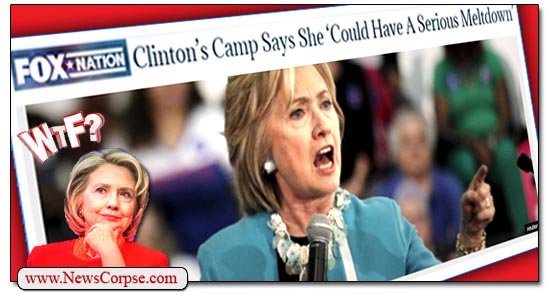 The Fox Nationalists reposted an article from their sister tabloid, Rupert Murdoch’s vile New York Post, with the headline “Clinton’s Camp Says She ‘Could Have A Serious Meltdown.'” That’s a pretty frightening scenario that would have the political world spinning – if it were true.

Note that the headline is a declarative statement of fact as to what “Clinton’s camp says.” In fact, neither Fox News, nor the NYP, has any evidence of anyone connected to Clinton saying anything remotely similar to that scandalous quotation. What they have is the ravings of a bona fide uber-rightist lunatic with a record of equally deranged utterances. At best the headline could have referred to an allegation by a dubious source.

The dubious source, in this case, is Edward Klein. He is a Fox News regular, and WorldNetDaily columnist, whose reputation for wildly false attacks on Hillary Clinton (and other democrats and liberals) is legendary. Klein is an unrepentant birther who believes that President Obama may have been created to be a Manchurian candidate from Kenya. Klein also believes that Chelsea Clinton was conceived after Bill raped Hillary, who Klein says is a lesbian. This is a “journalist” who Fox News takes seriously?

Among Klein’s prior prognostications for Fox was a piece about how Clinton was teetering on the edge of abandoning her quest for the presidency. The headline blared: “Hillary down in the dumps: Is Clinton about to drop out of 2016 race?” The article provided a surreal transcript of a private conversation between Bill and Hillary that Klein could not possibly have witnessed. That was in June of 2014, so we have the answer to the ridiculous question about whether her withdrawal was imminent. And it must be due to that level of inaccuracy that Fox and the NYP chose to revisit Klein’s reporting for this new article wherein Klein uses anonymous sources to allege that…

“Hillary’s been having screaming, child-like tantrums that have left staff members in tears and unable to work,” says a campaign aide. “She thought the nomination was hers for the asking, but her mounting problems have been getting to her and she’s become shrill and, at times, even violent.”

That’s a great story line if you’re on the writing staff of Days of Our Lives, but anyone who thinks that a Clinton campaign aide is going to divulge spicy rumors to someone like Klein is suffering from acute idiocy. Klein’s M.O. has always been to simply manufacture scurrilous gossip that fits his predetermined soap opera script.

For this sort of fantasy fiction to appear on WorldNetDaily, or the New York Post, is bad enough. But Fox wants to pretend that they are a real news enterprise, and despite all of the evidence to the contrary, they continue to try to convince us that they have true aspirations for journalistic achievement. However, it is reporting like this that always rats them out as the disreputable purveyors of schlock news that they are – and always will be.