Wayne Simmons has been a frequent guest on Fox News for many years, providing what they said was expert analysis of intelligence and military issues from an experienced professional. Fox often relied on his commentary to inform their audience about serious national security issues as they arose in the news. But as it turns out, Simmons had lied on his resume to the federal government when seeking employment and contracts, and now he is under indictment for “major fraud against the United States, wire fraud, and making false statements to the government.” 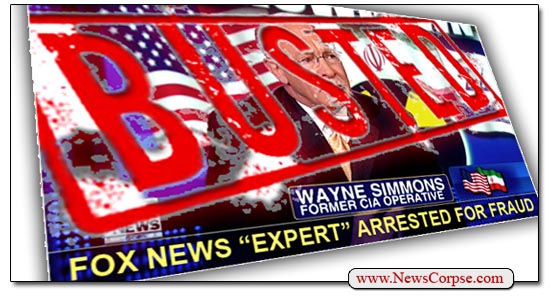 The FBI arrested Simmons and released a statement alleging his unlawful conduct, including misrepresenting his experience in the CIA and other intelligence services. From the FBI statement:

“According to the indictment, Simmons falsely claimed he worked as an “Outside Paramilitary Special Operations Officer” for the Central Intelligence Agency (CIA) from 1973 to 2000, and used that false claim in an attempt to obtain government security clearances and work as a defense contractor, including at one point successfully getting deployed overseas as an intelligence advisor to senior military personnel. According to the indictment, Simmons also falsely claimed on national security forms that his prior arrests and criminal convictions were directly related to his supposed intelligence work for the CIA, and that he had previously held a top secret security clearance. The indictment also alleges that Simmons defrauded an individual victim out of approximately $125,000 in connection with a bogus real estate investment.”

Simmons’ appearances on Fox News were fairly routine bits of rightist propaganda, exactly the sort of thing you would expect to see on Fox. In one of his most recent bookings he was on “Your World with Neil Cavuto” where they had this paranoid exchange:

Simmons: We’ve got at least nineteen paramilitary Muslim training facilities in the United States. Are you kidding me? What are they gonna do, go hunt deer during deer season? No! They’re using paramilitary exercises to plan and execute these type of operations all over the United States. And when it happens it’ll just be you and I saying “I told you so.”
Cavuto: Well, I hope you’re wrong my friend, but you’ve been uncannily prescient on a lot of this stuff.

Simmons went on to assert that…

“We are in a global war against an Islamic jihad. Until they get rid of these ‘no-go zones,’ you go out and put razor wire around them, turn off the water, and catalog them as they come out.”

Simmons probably loved the WWII Japanese interment camps, too. Of course, there weren’t any “no-go zones” in the U.S., but his remarks were delivered shortly after another Fox News “expert,” Ryan Mauro, had made similar false assertions about no-go zones on Bill O’Reilly’s show. Simmons even mentioned Mauro’s claims in his discussion with Cavuto. Those same claims were later cited by a domestic terrorist who was arrested for plotting an attack against a community of peaceful Muslim-Americans in upstate New York.

And while we’re on the subject of no-go zones, yet another Fox “expert,” Steve Emerson, charged that they were rampant in Paris. For that the network was forced to retract the claim and apologize. And all of it was hilariously skewered by a French TV program. However, they never retracted or apologized for the claims that nearly got a Muslim-American community massacred.

Other noteworthy appearances on Fox News saw Simmons referring to Obama’s election as “the coronation of the boy king;” claiming that the missing Malaysia Airlines MH370 had to be a sophisticated state sponsored attack; calling the Obama administration the worst administration this county will ever have known; saying that the best thing that could happen for this administration and State Department is that we are attacked because it takes all of the decision making away from Obama.

Really? The “best” thing that could happen is for us to be attacked? Sadly, that’s not the only time a Fox News guest suggested that. But perhaps the most ironic appearance Simmons made was on the November 15, 2007, episode of The Big Story with John Gibson and Heather Nauert. The segment was about a CIA/FBI agent that had just been found guilty of fraud and deception. Simmons said that …

“This has exposed the raw nerve, if you will, of a flaw in the background check, and without a background check, without knowing who we’re hiring, and who we are employing to protect our nation, we are in big, big trouble.”

No kidding, Sherlock! How Simmons could have the gall to comment on that matter knowing what he knew about himself is mind-boggling. It is the behavior of a sociopath. Keith Olbermann called it right when he made Simmons the “Worst Person in the World.” way back in 2006 for using a hoax to justify government spying on American citizens.

What’s frightening about the revelation that Fox News was relying on an impostor to provide analysis of national security is that the phony analysis he provided may have been exactly what Fox News intended. That’s because Simmons was identified as a participant in the Pentagon Military Analyst Program – an initiative developed during the Bush administration to dispatch retired officers, and other alleged experts, to the media in order to push their agendas in Iraq and elsewhere. The program was revealed in a Pulitzer prize-winning article by David Barstow for the New York Times. Barstow wrote that…

“To the public, these men are members of a familiar fraternity, presented tens of thousands of times on television and radio as “military analysts” whose long service has equipped them to give authoritative and unfettered judgments about the most pressing issues of the post-Sept. 11 world.”

“Hidden behind that appearance of objectivity, though, is a Pentagon information apparatus that has used those analysts in a campaign to generate favorable news coverage of the administration’s wartime performance.”

“The effort, which began with the buildup to the Iraq war and continues to this day, has sought to exploit ideological and military allegiances, and also a powerful financial dynamic: Most of the analysts have ties to military contractors vested in the very war policies they are asked to assess on air.”

So Simmons was a covert asset in the Bush campaign to spread war propaganda. And he remained a Fox News regular long after Bush was gone. Now he’s been arrested as a fraud. In that regard he isn’t much different than anyone else at Fox News. Virtually their entire roster is engaged in the same partisan deception on behalf of an extremist right-wing agenda. They all tell the same lies and they all work hard to disinform the American people.

“Government contractor and occasional Fox News guest Wayne Simmons has been charged with lying about his supposed career with the C.I.A. Prosecutors say Simmons broke the law by lying about his credentials on applications for consulting work. Simmons made appearances on Fox as a national security and terrorism expert. However, he was never employed by the channel and was never paid by Fox.”

Whether or not Simmons was on Fox’s payroll is irrelevant. He was a regular source of tainted information on serious subjects for which he pretended to be qualified. The glaring omission in Baier’s comment was that he did not apologize to viewers for repeatedly presenting a fraud on the air, nor did he officially retract anything that Simmons said. Baier seems to think the lack of a paycheck is absolution for engaging in disinformation. And it begs the question: If Fox wasn’t paying him, who was?