Rolling Stone’s Matt Taibbi has penned a thought provoking article that examines the fading glory of one of the world’s most prominent media barons, Rupert Murdoch. He begins above the fold with a no-holds-barred headline declaring that “Rupert Murdoch Is Deviant Scum.” And he has the reasoned analysis to back it up. 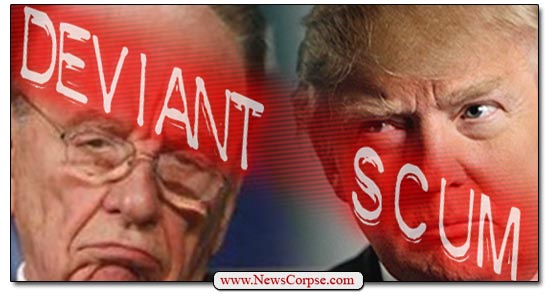 Taibbi carefully constructs a case for how Murdoch is losing either his empire or his mind, or both. At the outset is the observation that his crown jewel, Fox News, is at risk of being strangled by its own monstrous creation, Donald Trump. He notes that Murdoch “must be petrified at the prospect of losing his hard-won viewership at the end of his life.” The public feuding that has been ongoing between Fox and Trump threatens to sap the network of its previously loyal viewer base. Trump’s followers are incensed by what they feel is unfair treatment of their superhero and have pledged to boycott the network. Or as Taibbi deliciously puts it…

“Donald Trump is the fallen angel in the Fox story, a traitor who’s trying to tempt away Murdoch’s lovingly nurtured stable of idiot viewers by denouncing their favorite ‘news’ network as a false conservative God.”

Taibbi proposes that Murdoch’s fear of mogul emasculation is the impetus for his ludicrous tweet extolling Ben Carson, another former Fox News contributor, as potentially “a real black President who can properly address the racial divide?” And who could be a better gauge of real blackness that old Rupert? [For the record, along with Trump and Carson, the current GOP field of candidates includes three more ex-Fox employees, Mike Huckabee, Rick Santorum, and John Kasich.] But it’s Obama’s suspect blackness, in Murdoch’s view, that Taibbi focuses on. He notes that Fox’s standard profile of Obama is one of “a mongrel, a kind of Manchurian President, raised in madrassas and weaned on socialism, who hates white people and yearns to euthanize them.” Or when race was a part of the discussion, Obama was reduced to being a “secret street hood,” or a “skinny, ghetto crackhead.” Taibbi summarizes saying that…

“Rupert Murdoch has spent seven to eight years finding every conceivable way to say that Barack Obama isn’t one of us. The president is forever described as a kind of malevolent animal, unable to control his irrepressible urge to take and redistribute the white man’s property.”

The whole article is well worth the read. It contains rational insight, pertinent facts, and luminous prose. And I find it particularly relevant in light of an article I wrote three years ago positing that Murdoch was even then showing signs of losing it. On several pressing issues there were emerging stark difference between the powerful Murdoch of the past and the more impotent version of the present. On gun control, immigration, and climate change mitigation, all of which he viewed favorably, Murdoch’s views were contradicted by his Fox News subordinates. He was also being supplanted as the GOP kingmaker by his lieutenant Roger Ailes, CEO of Fox News. As I wrote at the time…

Politicians around the world were once obliged to pay their respects to the “Dirty Digger” if they hoped to succeed electorally. […] However, in recent months the Murdochian monarchy seems to have been sapped of its power. There has been none of the reverential genuflecting to the man whose anointment was once compulsory. There has been scant evidence of his presence in the political backrooms where influence is administered.

Suffice to say that it hasn’t gotten better for Murdoch since then. And Taibbi’s profile illustrates just how much his situation has deteriorated. He notes that Murdoch “senses his beloved audience of idiots drifting away.” It becomes a question of whether Murdoch is willing to sink as low as Trump in order to get them back. It’s a tough call, but if anyone can descend to the most putrid levels of human indecency it’s Rupert Murdoch – the man whose British newspaper hacked the phone of a murdered schoolgirl. Let Trump top that.

10 thoughts on “Headline Of The Year: Rupert Murdoch Is Deviant Scum (Rolling Stone)”