Exercising their renowned obsession for inventing trite pseudo-controversies, Fox News has managed to imagine a travesty in the latest issue of Marvel Comic’s Captain America. And not surprisingly, it revolves around an overtly racist theme stemming from the superhero’s new alter ego, African-American Sam Wilson, and a confrontation with undocumented immigrants. 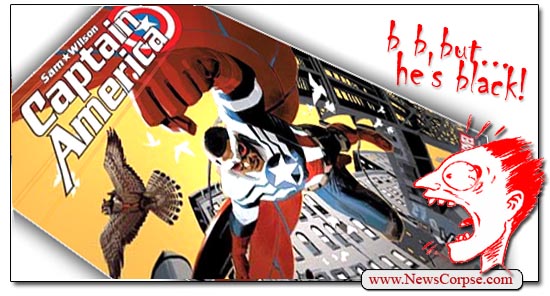 The Curvy Couch Potatoes of Fox & Friends were terribly upset by the news that the new black Captain America was going after an armed band of vigilantes who called themselves the “Sons of the Serpent.” The vigilante crew’s mission was to seek out and apprehend immigrants crossing the border illegally. Such vigilantism is blatantly unlawful and, in the real world, often ends up with people being severely harmed or even killed. Nevertheless, the folks at Fox & Friends regarded the Serpents as the heroes and Captain America as a villain stomping on the rights of free, nativist citizens. Here is an exchange from the segment (video below):

Clayton Morris: Comics books have been struggling to get readership, and so here you have Marvel doing a little bit of a PR stunt. In fact, they’ve made Sam Wilson, who was formerly The Falcon, he’s an African-American, he’s taking over as Captain America now. But he’s got a new odd enemy. Instead of going against Hydra and the typical Captain America villains, he’s going up against conservatives. That’s his new enemy.
Tucker Carlson: So who is this Serpent? Is this Serpent an Islamic extremism, an ISIS member bent on destroying western civilization? Nooo. The Serpent is an American who has misgivings about unlimitted illegal immigration and the costs associated with it. That, according to the comic book, is evil. […] The whole theme is the same, which is out there in the middle of the country, between Malibu and Georgetown, everyone is an ignorant snake-handling bigot and they need to be held in place or else they’ll turn this into Nazi Germany. […] Now the threat comes from ordinary Americans. Probably some of you watching at home. They think you’re dangerous.

The first hint that this segment was going to be dripping with racism was Morris’ assertion that making Captain America an African-American is just a PR stunt, and that an armed militia of xenophobes were simply ordinary conservative citizens. Carlson took over from there to trivialize the noxious bigotry of the vigilantes as merely em>”misgivings.” They certainly didn’t intend to use their abundant weaponry or follow through with their violent threats. Carlson was clearly disturbed that such decent thugs were characterized so poorly in the comic book, and how it reflected on the viewers of his program. While the Fox Friends highlighted some of the dialog from the comic, one part they conspicuously left out said…

“While others are content to peacefully protest or vote in rigged elections, the Sons of the Serpent believe that aggression must answer aggression. I declare you all enemy combatants.”

So the characters that Fox regards as garden variety conservatives are overtly threatening to abandon peaceful behavior. And they regard the immigrants, who they earlier said were disease-ridden criminals, to be combatants as if at war. Considering that fact that most immigrants who enter the country illegally are seeking work in agriculture or other menial labor jobs, they probably don’t qualify as fearsome warriors. But that didn’t stop Fox from casting a black Captain America, who takes the side of brown invaders, as an abomination.

Oddly enough, this isn’t the first time that Captain American has stirred up the ire of Fox News. A few years back the comic got Fox all huffy with a single frame that accurately portrayed the Tea Party. However, the source from which Fox got this new story appears to be a video produced by the MacIver Institute. Fox’s video even includes segments clipped directly from MacIvers’s video. For the record, the MacIver Institute is a right-wing think tank funded by the Koch brothers and the neo-fascist John Birch Society. Which explains a lot. And it certainly explains where Fox News goes when they need a new racist scandal to fire up their dimwitted viewers.