In remarks delivered today in the White House Rose Garden, Vice-President Joe Biden announced that he will not be a candidate for president in 2016. After a painfully long decision-making process, Biden stood with President Obama and his wife Jill to dash the hopes of right-wingers everywhere who were yearning for a more contentious Democratic primary. 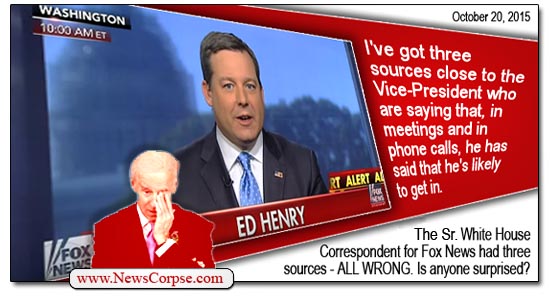 However, Fox News may not be satisfied with this announcement. After all, just yesterday their senior White House correspondent, Ed Henry, appeared on the air (video below) to reveal that…

“He’s likely in. […] I’ve got three sources close to the Vice-President who are saying that, in meetings and in phone calls, he has said that he’s likely to get in.”

Three sources! That settles it. Biden is only a single source, so it’s three against one and, therefore, he must be lying. The folks at Fox News can mark this down as another example of the dishonesty of the Obama administration. Trey Gowdy is expected to call for hearings on whether or not Biden lied about his presidential ambitions and what email account he used to convey them to Obama.

Henry was not alone in his assessment of Biden’s intentions. His Fox News colleague Bill O’Reilly said weeks ago that Biden was “ramping up to challenge Hillary Clinton” and that he “believes he will be in the race.” Another colleague, Monica Crowley, insisted repeatedly that “As I have been saying… He’s running.”

Other media figures have also chimed in. For instance, Diane Francis of the National Post said that “#Biden definitely running, good source, amid concern about Clinton skeletons;” Roger Simon of PJMedia tweeted “BREAKING> Big financial backer says #Biden definitely running;” Gabriel Sherman of New York Magazine wrote “Joe Biden is running for president — a fact that has been obvious, and true, for weeks;” and The Most Wrong Man in America, Bill Kristol of the Weekly Standard, couldn’t be more certain saying…

“I’m told by Democrat I trust that Biden ‘almost certain’ to run, will announce this week in time to speak at the Iowa J-J dinner Sat night.”

Biden confirms to Obama at lunch today he’s running, announces at U Delaware tomorrow. You can feel the Joementum!

There is never a shortage of idiotic punditry surrounding any event in American politics. But with so many instances of certainty, backed by allegedly unassailable sources, you have to wonder how these people keep their jobs. Will Ed Henry go back and grill his three sources to find out why they were so horribly wrong? Will he apologize to his viewers? And coming on the heels of the Fox News intelligence analyst who was just arrested for falsifying his credentials, you have to wonder if anything that anyone says on the network is worthy of consideration.

Even as I’m writing this, Charles Krauthammer is on Fox saying that Biden’s speech today was a actually a secret announcement that he IS running, and that he will step in as soon as Clinton is indicted. So we can all feel a little more at ease knowing that, no matter what is happening anywhere in the world, the conspiracy kooks are working hard to invent crazy theories based on nothing but their unique brand of dementia.