In the best of circumstances, a political debate should be illuminating in a manner that allows voters to assess the fitness of candidates for public office. However, the best that can be said about the Republican primary debate on CNBC (transcript) is that it illuminated the rabid opportunism of the candidates and the penchant for provocation on the part of the moderators. 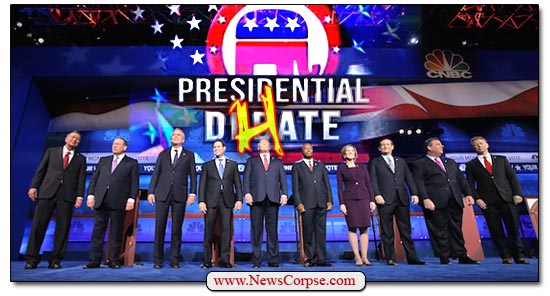 See the update to this article here.

While there was an attempt by the moderators to inject some substance into their questions, they inexplicably capped their queries with an inappropriate zinger that only left them wide open for criticism. For example, John Harwood constructed a perfectly legitimate question for Donald Trump that called on him to explain how his wall building, tax slashing, immigrant deporting policies could be achieved without wreaking havoc on the economy. But then Harwood finished off with “Is this a comic book version of a presidential campaign?” Regardless of the aptness of the imagery, the only conceivable purpose for that framing would be to give Trump something to complain about. This pretentious strategy was repeated throughout the debate.

And the complaints veritably gushed from debaters who were eager to hear some reasonable questions and avoid answering them (which they did all night). The backlash directed at the media and the moderators easily became the dominant feature of the debate, and it was almost the only thing that was discussed in the post-debate analyses. The most replayed moments included Marco Rubio tagging the mainstream media as a SuperPAC for the Democrats, and Ted Cruz lamenting that “The questions that have been asked so far in this debate illustrate why the American people don’t trust the media.” Consequently, the only takeaway from this debate was that Republicans hate the media, something everybody already knows.

Cruz went on to argue that the media treated Democrats differently, “fawning” over “Which of you is more handsome and wise?” That characterization of the Democratic debate is wholly inconsistent with reality. From the transcript of their CNN outing, moderator Anderson Cooper asked Democrats the following questions:

Those were not fawning, softball questions by any stretch of the imagination. But Republicans only retain information that comports with their preconceptions. Therefore, the liberal media is invariably portrayed as fiercely pro-Democrat and virulently anti-Republican. What’s more, the conservatives never apply the same standards to their benefactors at Fox News, to whom they still suck up despite the tough questioning they got when Fox hosted their debate.

One of the more shameful exchanges of the CNBC debate was when Becky Quick posed this query to Trump: “You had talked a little bit about Marco Rubio. I think you called him Mark Zuckerberg’s personal senator because he was in favor of the H1B.” Trump interrupted to insist that “I never said that. I never said that.” So Quick quickly apologized. The problem is that Trump actually says exactly that on his own website. When the debate came back from a commercial, Quick noted that fact but never challenged Trump’s denial. And to make matters worse, this segment of the debate was discussed on Fox News the next day and host Jon Scott falsely asserted that it was Quick who was wrong, saying that “it seems that the research was not necessarily done.” This was after he already knew that she was correct and had cited her source during the debate.

In addition to that, the debate featured a couple of statements that were highly significant, but are not likely to garner much attention. First, Carly Fiorina said that “There is no Constitutional role for the Federal Government to be setting minimum wages.” Apparently ignorant of the Commerce Clause, Fiorina boldly came out in favor of ditching the minimum wage. Secondly, Carl Quintanilla directed a question to Trump with the preface that the site of the shootings at Umpqua Community College in Oregon “was a gun-free zone,” Trump readily agreed. But not only is that untrue, there were actually people there with guns who did not engaged the shooter.

So aside from all of the misinformation, the inter-party hostilities, and the failings of the moderators, the one thing that will persist as the defining characteristic of this debate is the intense loathing that Republicans have for the media. It is that rancorous acrimony that will supplant any useful knowledge that might have been gained about the candidates. And since everyone already knew that Republicans hate the press, the whole affair was a complete waste of time.

6 thoughts on “What We Learned From The GOP’s Trainwreck Debate On CNBC: Republicans Hate The ‘Liberal’ Media”