The Republican field of presidential primary candidates are cowering together to formulate a new debate process that isn’t so darn frightening to them. Following the debacle on CNBC, they are taking steps to insure that such ghastly encounters are avoided in the future in favor of more friendly frolics through the political pastures of pussy willows and wingnut trees. 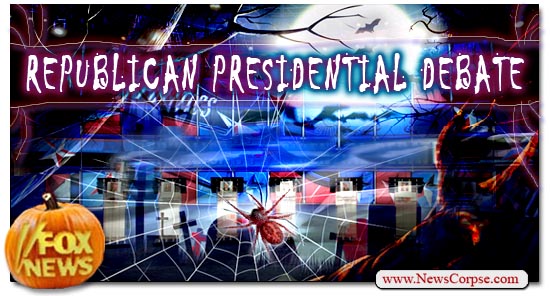 The Republicans spent two hours Wednesday night whining about how the debate questions were framed. They had some justification, but they carried it so far as to dodge even the substantive questions, using their frothy indignation as an excuse. Immediately afterward they went into high hysterics over what they asserted was a fiendish plot by commie instigators to tarnish them and their party. But accusing the Wall Street defenders at CNBC of being ultra-liberal conspirators against these poor, dumbfounded conservatives smacks of severe mental breakdown.

Now the GOP contenders are planning to huddle together to come up with a new debate format that better suits their needs. They intend to address how they might take more control over the process, diminish the role of the Republican National Committee, and decide how the debates are conducted, including the selection of moderators. It’s an unprecedented initiative to transform what is supposed to be an open dialog that provides voters with an informative look at the candidates, into a PR vehicle that functions more like propaganda.

The RNC, which is taking some heat from the candidates, had already barred MSNBC from hosting any debates when they originally published their schedule back in January. That admission of fear has now escalated as the RNC chairman, Reince Priebus, advised NBC today that the one debate they had scheduled (Fox News has four), in partnership with Telemundo, has been “suspended,” whatever that means. So the RNC intends to punish NBC for the perceived wrongs committed by a separate unit of the Comcast/NBC family, And in the process they are also risking their only access to a minority audience, via Telemundo, that the GOP desperately needs to make inroads with. Will Republicans make demands as to who will moderate or what can be asked in order to lift the suspension? Well, Priebus is now saying that “Every debate on the calendar is going to be reevaluated, reset — look at the format, the moderators, everything,”

What really makes this whole phony controversy ridiculous is that it doesn’t benefit any political party to impose such strict demands. First of all, if they get their wish and appear before “friendly” moderators like Sean Hannity, Mark Levin, and Rush Limbaugh (as Ted Cruz actually suggested last night on Hannity’s show), they might find the questioning even more damaging. The rightist Taliban, as represented by Limbaugh et al, will be more likely to force candidates to stake out extreme positions which they will be unable to “Etch-a-Sketch” away after the primaries. The wingnut media are notoriously committed to the sort of ideological purity that voters find repugnant. What’s more, even if they got the sympathetic treatment they desire, it would only result in the candidates being woefully unprepared for the full-contact combat they will eventually encounter in the general election.

If Republicans go through with this dictatorial mission to force news networks to obey their commands, the networks must refuse to participate and decline to broadcast any such manipulated program. In fact, networks that aren’t directly affected should also boycott the Republican debates in solidarity with the independence of the press. It would be a journalistic atrocity to submit to such interference in the role of the media. If Republicans want a fully scripted television farce, let them buy the time like any other telemarketer.

In the end, what Republicans are proposing now is not only hostile to freedom of the press, it is also horribly bad judgment with regard to their own interests. It will leave their candidates unprepared for debates with Democrats, and mired in ultra-rightist ideologies that will alienate voters. And if that weren’t enough, it also reveals them to be afraid of being exposed to the sort of tough questions that will occur throughout any political campaign. And if they can’t handle a few questions from reporters, how will they ever handle Vladimir Putin and ISIS?