Proving once again that having a degree in medicine doesn’t indicate any capacity for understanding other fields of study, Dr. Ben Carson has taken a position on immigration that defies any semblance of logic. So of course, the Fox News community website, Fox Nation, saw it as brilliant and passed it along to their dimwitted readers. 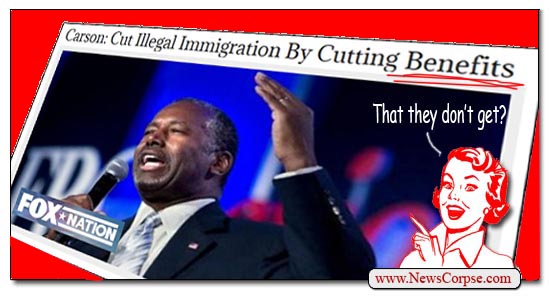 Carson spoke to supporters in Henderson, Nevada, where reports revealed his plan for ending illegal immigration. It is a plan that he described as “simple” and with which “You can pretty much get it to 100 percent.” However, it would be more accurate to describe it as simple-minded. The fact that he believes that he can reduce illegal immigration to zero is the first indication that he’s gone completely bonkers.

The key assumption in the Carson plan is that immigrants are drawn to the United States by a smorgasbord of freebies they can feast upon when they get here and immediately proceed to slacking off. It still remains a mystery how such lazy moochers can simultaneously be accused of taking jobs away from Americans while lounging by their pools and collecting welfare.

Carson’s plan would cut off all of the government benefits that these freeloaders are supposedly enjoying, which would remove the primary incentive for them to come here. Of course, Carson did not identify any specific benefits that these alleged sponges are absorbing, but insisted that without them, “you won’t have anybody even trying to do this.” Probably the main reason why Carson could not cite a single abused benefit is that he couldn’t come up with any that undocumented residents are entitled to. And the few that may be available are not applied for by most immigrants due to the fear of being discovered and deported.

Had he done any research at all, Carson would have learned that undocumented immigrants are not eligible for most types of welfare, including food stamps, housing assistance, health care, etc. What’s more, they actually pay far more into state and federal treasuries than they will ever see come back from any source. They pay about ten billion dollars annually in state and local taxes. And over a decade they have contributed over 100 billion dollars to Social Security, which they are not eligible to receive. In effect, they are donating a substantial portion of their income to the retirement of American citizens.

So Carson’s plan to end illegal immigration is to deny the immigrants benefits that they do not and cannot receive. And it’s all based on the absurd premise that these nonexistent benefits are what draws them to make long and treacherous journeys across international borders. Had Carson not spent so much time researching how the pyramids were really just giant grain silos, he might have learned that what makes the U.S. such an attractive destination is the prospect of jobs. Yet Carson and his right-wing pals never propose cutting off access to that benefit by threatening to arrest or otherwise penalize the employers who are providing it.

What’s really most depressing about all of this is not that there are pitifully ignorant people like Carson and Donald Trump spewing such unmitigated nonsense. It’s that they are the leaders of their party’s primary contest for President of the United States. That there are so many Americans who are so blind and/or gullible that they buy into the most idiotic drivel is what should worry the rest of the country and motivate them to vote next November.