The warped philosophy of conservatives in America has long held that the primary reason for the persistence of terrorism is that President Obama and other Democrats are reluctant to utter the phrase “radical Islamic terrorism.” They somehow have concluded that those magical words are key to defeating groups like Al Qaeda and ISIS. And they wonder why we think they’re stupid. 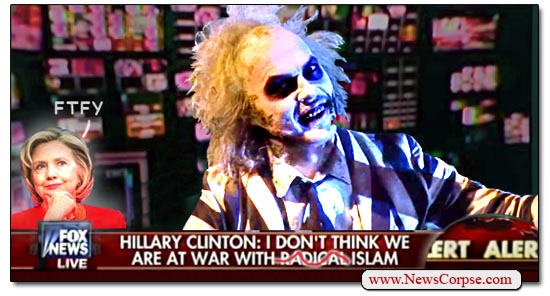 Following the Democratic Debate in Iowa on Saturday, the call to cast the magic spell was once again made the centerpiece of rightist criticisms. GOP candidates, and right-wing pundits on Fox News and elsewhere, have uniformly adopted the fabled “Reverse Beetlejuice Doctrine” wherein you shout “radical Islamic terrorism” three times and ISIS disappears. Actually, it isn’t even required to shout it. You can just tweet it. For example:

In addition to these individuals, conservative media is singing from the same hymnal. National Review, Breitbart News, Washington Times, Free Beacon, and the Daily Caller are among those in the choir. It’s clearly an obsession with these folks. They are convinced that babbling a few specific words is a better indicator of the determination to fight terrorists than actually fighting terrorists. So even though Obama ordered the successful assassination of Osama Bin Laden, and as Commander-in-Chief presided over the killing of thousands of terrorist operatives, including many of their leaders, he can’t possibly be serious about the mission until he recites the approved scriptural incantation.

For the record, just this week under the leadership of President Obama, missions were carried out that are believed to have resulted in the deaths of the ISIS chief in Libya and the infamous ISIS executioner known as Jihadi John. And all without invoking the magic spell.

At Fox News they are engaging in their standard game plan of distorting reality in a way that twists it to their far-right biases. Ed Henry, their senior White House correspondent, in a post-debate report told Sean Hannity that “At one point [Hillary Clinton] said ‘I do not believe we’re at war with radical Islam.’ The reaction to that online and overnight will be very interesting.”

There are numerous reasons for declining to fall into the “radical Islamic terrorist” trap. News Corpse spelled them out early this year in some detail. The gist is that we have legitimate concerns regarding our ability to form coalitions with the Muslim nations in the Middle-East whose cooperation is required to prevail against ISIS. That is not helped by demeaning their faith. But it’s more than that. By accepting the terms and definitions of the terrorists, Republicans, Fox News, et al, are acting as the PR department for the terrorists who desperately aspire to be regarded as the legitimate voice of Islam. Why are they insisting on granting the terrorists that victory?

And here’s some perspective from Muslims on the anti-Islam extremists who pretend to be Muslim.