In what is being described as the worst refugee crisis since World War II, the plight of displaced Syrians continues to be a daunting humanitarian problem that is putting pressure on nations around the world to find a compassionate solution.

The United States is among those nations, but it is battling opposition from within. Not surprisingly, it is the Republicans and other conservative politicians and pundits who are adamantly against allowing Syrian refugees safe harbor in America. So far, more than half of the state governors are on record as opposing resettlement of Syrians in their states, and all but one of them are Republicans. [Legal note: These constitutional fetishists are unaware that they do not have the authority to dictate immigration policy, which rests with the federal government]

The GOP’s arguments against welcoming these refugees are consistently based on the fear that terrorists will clandestinely slip in among the legitimate migrants. While there is very little evidence of that occurring, it remains the favored excuse of the refugee opponents. The typical refrain goes something like this:

Oh, sorry. Those were actually the reasons that Republican politicians and pundits opposed letting people from West Africa into the country last year during the Ebola outbreak. The degree of hysteria expressed by the wingnut contingency at that time was deafening. For their trouble they earned PolitiFact’s “Lie of the Year” award for 2014. It was a well-deserved tribute to their deranged insistence that Americans were going to be infected by the millions, and those who were fortunate enough to avoid the disease would be slaughtered by terrorists. Some of these fear mongers, like Glenn Beck and Fox News’ Keith Ablow, accused Obama of deliberately orchestrating this mass extinction of the U.S. population.

And while we’re on the subject, those were also the very same excuses the rightists gave for opposing the resettlement of Latino children. When thousands of kids were stranded in the Southwest they were treated like a plague and accused of being disease carriers, or having associations with drug traffickers or terrorists.

Let’s just call it the “Republican Crisis Recycling Center” where they repurpose their standard complaints to fit whatever outrage they are currently trying to push. 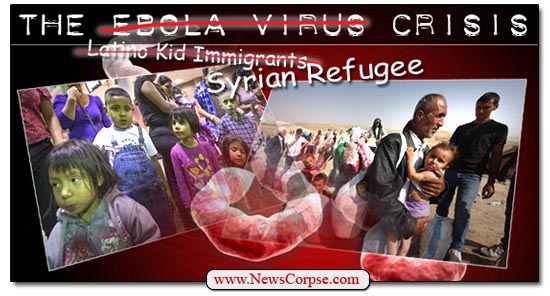 This might be a good time to point out there were never any outbreaks of Ebola in the U.S., nor did any of the kids who were eventually placed in foster homes blow up any pizza parlors. The irrational hysteria of the rightist fear merchants never materialized as they predicted (hoped?). And all of the available evidence points to the same results if we welcome the Syrian refugees in to America. There are, in fact, already some 2,000 Syrian refugees who have resettled here since 2011, and in four years they have done nothing but try to put their tattered lives back together.

Donald Trump was among those who exploited the Ebola crisis and charged that infected persons would be pouring across our southern border. Now he is doing the same to Syrians who he is convinced are serving as a “Trojan Horse” for terrorists. His plan is to acquire a parcel of land in Syria and make it a “safe zone” for the refugees. All 4,000,000 of them? It would have to be a city the size of Los Angeles. And no matter how good a builder he fancies himself, he isn’t going to construct such a metropolis overnight. These people need housing and food and medicine and all the other necessities of life, not a tents in the desert.

Sadly, that’s the sort of dumbfounded thinking (with an emphasis on the dumb) that dominates the Republican mindset. Another example is Mike Huckabee’s suggestion to only allow Christian refugees in. President Obama called that religious test “shameful.” How he would differentiate the Christians from the Muslims and others, he did not say. I suppose he could tattoo a number on all the Muslims to identify them for rejection. Then he can help Trump load 11,000,000 Latinos into train cars to deport them to “safe zones” in Central America for his reprise of Operation Wetback.

What the right seems to forget is that these refugees are fleeing the same violence and terrorism that we are fighting in Iraq, Syria, and elsewhere. They also seem to forget the values embodied in their faith that calls for compassion, service, and brotherhood. And finally, they quite easily forget the example of America’s principles expressed by the gift from France that beckons to the world…

Give me your tired, your poor, your huddled masses yearning to breathe free; the wretched refuse of your teeming shore; send these, the homeless, tempest-tossed, to me. I lift my lamp beside the golden door.

[Addendum:] Jesse Watters of Fox News managed to connect the refugee crisis with the Ebola outbreak. On The Five he said “Obama has imported dangerous things into this country since he got there. He’s imported socialism here, He’s imported Ebola into America. He’s imported illegal aliens. Remember he brought all of the Ebola victims into this country?” All of them? This is the sort of idiocy that permeates the racist right-wing ideology on issues that go far beyond the current problem with refugees.