This bears repeating: Fox News created Donald Trump in their own lying image. And if anyone is looking for more proof of that, the Fox Nation website provided it today. 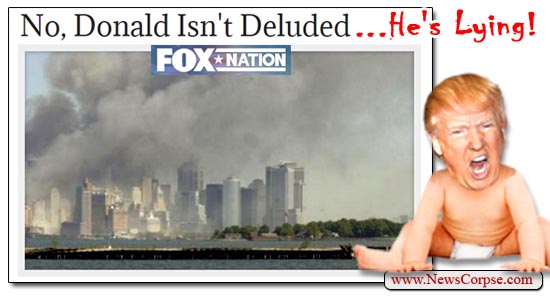 An article posted on Fox Nation bore the headline “No, Donald Isn’t Deluded.” It was referring to Trump’s assertion that he saw “thousands and thousands” of Muslims in New Jersey celebrating the fall of the World Trade Center towers on 9/11. There has never been any evidence of that happening. There are no photographs, no video, no police reports, nothing. In other words, Trump is either very much deluded, or lying through his dentures.

It is, of course, ridiculous to believe that thousands of people could assemble in a major city for any purpose and leave no trace of it ever having taken place. Nevertheless, Trump has steadfastly clung to the obvious falsehood. And he’s had help from Fox News, who has been there to defend the indefensible many times in the past. However, this new attempt is astonishing for its own brazen dishonesty.

The Fox Nationalists linked to an article from the New York Post, a sister publication that is also owned by Rupert Murdoch. The Post’s article was titled “NJ police captain says some Muslims did celebrate on 9/11.” That’s accurate, as far it goes, which isn’t very far. The Post used as its source an article published by a New Jersey news website and written by Mark Mueller of NJ Advanced Media. Nowhere in the article were Trump’s assertions affirmed. In fact, very near the beginning Mueller wrote that…

That’s a pretty clear statement that the investigation had failed to uphold the ludicrous claims made by Trump and parroted by Fox News. And yet, the Post’s article cut and pasted many of the anonymous and uncorroborated accounts of relatively low-key partying by some small groups of people, but never reported the primary finding that the claims of mass celebrations were baseless.

What’s more, Mueller was interviewed on Fox News yesterday by Gretchen Carlson, who sought to churn the author’s article into a bigger story than it was. Unfortunately for her, after her first question inquiring as to what he found, Mueller doused the whole affair by saying that…

“First I can tell you what we didn’t find, which was large celebrations at multiple locations. As the reporter who wrote this story I have a great concern that this story will be used for political gain, so I wanted to set that out there right away. Donald Trump claimed that there were thousands and thousands of people celebrating in Jersey City. We have found no evidence of that whatsoever.”

So Mueller anticipated that Fox News would try to stir up a phony controversy and put it to rest before it could even be launched. Carlson soldiered on, trying to pretend that it was just as bad that a couple of dozen people might have celebrated, as if that would exonerate Trump for his gross dishonesty.

Since Carlson knew that Mueller’s investigation had concluded that Trump’s claims were baseless before she booked the interview, she clearly intended to deceive her audience by not addressing the most salient fact in the article. Making things worse was the New York Post, who published their own article based on Mueller’s without mentioning once that it essentially proved Trump to be a liar.

And worst of all was Fox Nation who, after the publication of Mueller’s article, and the airing of Carlson’s interview, and a day’s extra time, still posted their piece declaring that Trump was not deluded. Let that sink in. They knew that the investigation found “no evidence whatsoever” that Trump was right, but they still posted an item hailing how right he was – the complete opposite of reality according to their own sources. Does that sort of oblivious, self-obsessed behavior sound familiar? Like I said at the start: Fox News created Donald Trump in their own lying image. And they shamelessly mirror each others deceit.