The annual “Lie of the Year” award by PolitiFact for “the most significant falsehood” of 2015 has been given to Donald Trump for his collective “misstatements” throughout his six month campaign for the Republican nomination for president. 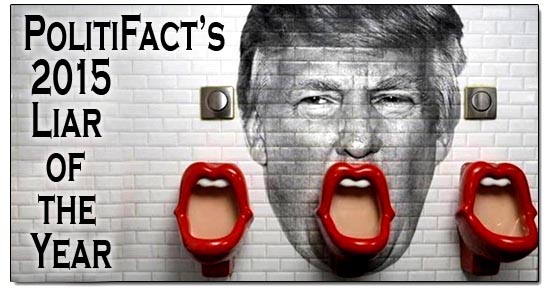 This may be the easiest decision that PolitiFact ever had for their annual fib-fest. In the short time that Trump has been a candidate he has racked up an unprecedented record of flagrant fabrications. Three out of four of Trump’s statements reviewed by Politifact this year were rated “Mostly False” or worse. Indeed, 21% were “Pants on Fire” lies. Aaron Sharockman, PolitiFact’s executive editor, announced the decision in an online video saying…

“PolitiFact’s Lie of the Year goes to the most significant falsehood that we can find. But in 2015 we couldn’t settle on just one. That’s because of Donald Trump. Trump, the billionaire businessman who entered the race for persident in June, has many big and bold statements. Unfortunately, most of them are inaccurate.”

PolitiFact focused on three prominent falsehoods that Trump made, and subsequently refused to acknowledge as false despite the overwhelming evidence. They were: his delusional assertion that he saw “thousands and thousands” of Muslims in New Jersey cheering the fall of the World Trade Center towers on 9/11; his claim that the Mexican government was deliberately sending criminals to the U.S.; and his tweet that insanely stated that 81% of whites murdered in America were killed by African-Americans. The correct number is 16%. 82% of whites were killed by whites.

However, Trump’s pathological lying goes far beyond those examples. News Corpse has been compiling his unabashed dishonesty in the Trump Bullshitopedia. So far there are more than three dozen documented lies. Here are just a few samples:

Ironically, the news of Trump being designated the year’s biggest liar comes on the same day that he is laughably demanding an apology from Hillary Clinton for saying that “He is becoming ISIS’s best recruiter.” (Clinton responded “Hell no!”) It is unarguably true that the rhetoric being espoused by Trump is a recruiting aid for terrorist organizations trying to paint the U.S. as the enemy of Islam. And it isn’t just Clinton saying so. It’s also the consensus of most terrorism experts. Even Trump’s GOP colleagues agree. Sen. Lindsey Graham (the only GOP candidate with military experience) recently said that Trump’s plan for the Middle East “would the biggest recruiting opportunity in the history of ISIL.”

So congratulations, Mr. Trump, on being recognized for the bullshit artist you are and always have been. The fact that your lies are so numerous that PolitiFact couldn’t even narrow down their assessment to a single one really tells the story of your acute pathology. What’s more, anyone who continues to support you after this humiliation is essentially admitting that they don’t give a damn about the truth. But since they have already conceded that they are racists who are comfortable supporting a neo-fascist, wanna-be dictator, that should not come as a surprise.

[Update:] Trump has responded to PolitiFact’s “Lie of the Year” exactly as you might expect he would – with more lies:

Trump told ABC’s Jonathan Karl that PolitiFact is “a very dishonest group in my opinion.” And he told Fox & Friends that he’s “been proven right,” despite not being able to cite any of the alleged “proof.”

3 thoughts on “PolitiFact 2015 Lie Of The Year: The Campaign Misstatements Of Donald Trump”