It’s getting awfully difficult to keep up with the episodes of deranged lunacy that flow from Donald Trump’s noxious campaign. However, this latest example of how preposterous his attempts at promoting himself are exceeds all previous lapses of reason. 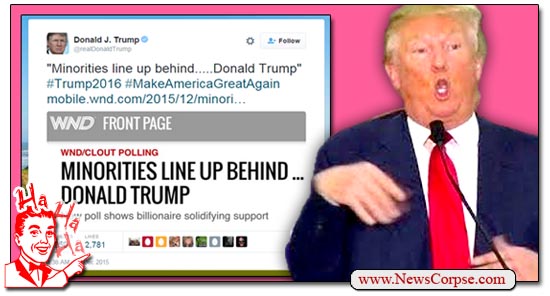 In a tweet yesterday, Trump bragged about the results of a poll that blared: “Minorities Line Up Behind Donald Trump.” If you are suspicious of that assertion, congratulations. You are probably within the scope of reality-based observers of political affairs. But if you tend to give it any credence, please check yourself in to an acute psychotic care facility as soon as possible.

The poll was conducted by a disreputable pollster for a pseudo-news outfit that is still trying to find President Obama’s Kenyan birth certificate. WorldNetDaily published the “survey” with the implausible conclusion that large pluralities African-Americans and Latinos are backing Trump’s racist candidacy. The article says that…

“…a new poll, which still has Trump leading the race, shows 40 percent of blacks are lining up behind Trump, as are 45 percent of Hispanics, and even nearly 19 percent of Asians. Blacks and Hispanics, in fact, even support Trump at a higher level than whites.”

Ordinarily it would be sufficient to identify WorldNetDaily as the source of this ridiculousness to dismiss it in its entirety. But the details of this story are so laughably inane that a little further examination is warranted, if only for the entertainment value.

The poll’s internals show that the 40% of blacks that are lining up behind Trump actually consists of just four respondents. That’s right, this pollster was only able round up ten African-American Republicans to interview about the GOP primary, and just four of them indicated that they would vote for Trump. That would make the margin of error somewhere in the 90% +/- range. What’s more, the total sample size of the poll was 447, which means that the black segment accounted for about 2% of the total. The same smarmy stats carry over to the poll’s results for Latinos.

Nevertheless, Trump proudly tweeted the link to this poll with obvious excitement about the overwhelming affinity that “the blacks” (as he calls them) have for him. He apparently was not concerned about the unscrupulous reputation of the pollster or his shoddy methodology. Nor were his glassy-eyed followers who obediently liked and retweeted the nonsense poll. And of course, the right-wing crackpots at Breitbart, Gateway Pundit, RightWingNews, and other conservative fringe dwellers posted celebratory articles citing the wacko poll.

The truth, of course, is that Trump is pulling record low percentages of minority supporters. A recent Quinnipiac poll found that Trump’s support among African-Americans was in the low single digits. Furthermore, Trump’s real base of support is among America’s white supremacists. As News Corpse reported earlier this month, Trump is the runaway favorite of the KKK, but still thinks he can win 100% of the black vote:

Yesterday Politico published an in-depth article detailing the broad-based admiration for Trump among America’s white supremacists. […] These views have resulted in a surge of support from the KKK crowd. From Politico:

This is the level of dementia that we are dealing with when it comes to Donald Trump. He is a man so deluded by his own pathological narcissism that he actually believes everyone loves him, even those he brutality insults. And in a hysterical attempt to maintain his vainglorious egotism, he is now latching on to what may be the most ludicrous poll of the century.

[Update:] WorldNetDaily just named Trump its “Man of the Year” for 2015. Perhaps it’s because of his valiant efforts to track down Obama’s birth certificate – which he never disclosed and won’t talk about anymore.