There is a point at which Donald Trump’s repugnant reality TV persona crosses over the line from merely hateful, nativist demagoguery to psychopathic delusion. Some will argue that the line was crossed long ago, but whatever doubt remains has just been obliterated. 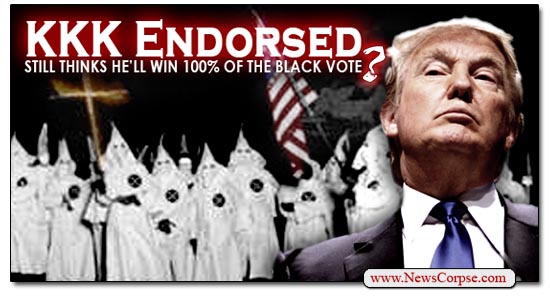 Yesterday Politico published an in-depth article detailing the broad-based admiration for Trump among America’s white supremacists. That ought not to come as a surprise to anyone who has been paying attention to Trump’s campaign. On the day he announced that he was running he slandered Latinos by characterizing Mexican immigrants as rapists and murderers. He went on to insult pretty much every minority constituency in the nation, culminating with his most recent racist and unconstitutional proposal to ban all Muslims from entering the country. These views have resulted in a surge of support from the KKK crowd. From Politico:

Indeed, Trump has made it easier for bigots to come out of the closet and proudly exalt their white heritage over the minorities they fear and regard as inferior. Given his overtly racist rhetoric, that is not surprising. What is surprising is that Trump’s campaign not only doesn’t think he will be hurt by his hate speech, but what they actually believe they can achieve is mind-boggling. Michael Cohen, Trump’s personal attorney and executive vice president at the Trump Organization, told Yahoo News…

When asked how much of the African-American vote the campaign wants to win, Cohen had a perfectly Trumpian answer: All of it. “Our goal is 100 percent.”

That’s right. 100%! If that isn’t a symptom of megalomaniacal psychosis than Napoleon was a misunderstood wallflower. Trump would be exceedingly fortunate with a showing in the teens. He has done nothing but alienate black voters. A recent meeting he held with black pastors turned into an embarrassing affair after he told the press that they were endorsing him. Many of them had to correct the record and very few ended up making an endorsement. But Cohen went on to make an observation that touched on the truth at the beginning, but then fell completely apart.

According to Cohen, Trump needs to win black voters because other minority groups won’t support him: “The truth, yeah, I’m trying to coordinate it because I am mindful of the fact that, you know, there are coalitions and I’m talking about now like Hispanic coalitions that … will not support Trump,” Cohen explained. “And that’s OK because the ones that don’t like Trump aren’t even here legally and they can’t vote, so it doesn’t really matter, right?”

This doesn’t even make sense. Cohen is saying that Trump needs to pack in black voters to replace Latinos who will not vote for him. To the extent that he needs to find constituencies to replace those he’s insulted, that’s true. But then he asserts that those Latinos he’s lost can’t vote anyway. So according to his own warped logic, there aren’t really any lost votes that need to be replaced by African-Americans. And setting aside the incoherence of that logic, he is further demeaning Latino-Americans by accusing them all of being here illegally. But not only are they a significant percentage of the citizen population, they are the fastest growing voter demographic in the nation.

This would be a good time to remember that Trump had previously asserted that, despite his hostile rhetoric, he intended to win the Latino vote as well. Back in July he said that…

“I have a great relationship with the Mexican people. I have many people working for me […] They love me, I love them. And I’ll tell you something, if I get the nomination, I’ll win the Latino vote.”

See? He loves them. And they love him because they work for him. And everybody loves their boss, don’t they? Especially bosses who insult you and treat you like crap (A few days ago employees of Trump’s International Hotel in Las Vegas voted to unionize in order to attain fair wages, respect, and dignity). Apparently, now that great relationship with Mexicans has soured. Although he still has his great relationship with “the blacks,” as he calls them. At least until he decides to throw them overboard too. But none of this better get back to the Klan, the only group in this story that is actually supporting Trump’s candidacy.