Good news for the satanic sportsmen of the country. Fox News has announced that “It’s Open Season On Christians In America.” That’s right. This sorely put upon majority of crybabies is at imminent risk of total eradication from the Secular Progressive cabal of evildoers. 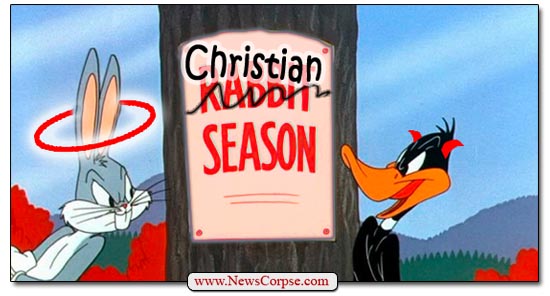 The creeping danger that is casting a shadow on these righteous Americans now was identified by Rev. Franklin Graham and brought to the attention of the faithful by the Fox News resident evangelical correspondent, Todd Starnes.

In a conversation with Starnes, Graham fretted that “I believe we are perilously close to the moral tipping point for the survival of the United States of America,” and he declared that he would “refuse to be silent and watch the future of our children and grandchildren be offered up on pagan altars of personal pleasure and immorality.”

Well, that’s comforting. After all, he has already witnessed the Supreme Court redefining marriage, the rise of Islamic radicals, and the horror of Christians losing their First Amendment rights (which he freely said to a national news network). What this all leads to is the foreboding reality that…

“There now exists deep-seated antagonism and hostility toward Christianity in every seat of power in this nation – government, media, courts and education.”

To this Starnes stood up proudly to proclaim that “Instead of ignoring the rotting of America’s culture,” Graham promised to do something about it. And that somnething is to embark upon the “Decision America Tour,” a series of prayer rallies at the capitol buildings of all 50 states. Graham insists that this is not a political movement, but an appeal to the Almighty. He says that he will “lead this nation in prayer, confessing the sins of our country, asking for God’s forgiveness and encouraging Christians to get engaged in the political process.” Because, of course, this is not at all political. And to further confirm the non-political nature of this campaign, Graham complained that…

Never mind the fact that there is nothing stopping churches from fulfilling their mission to provide food, clothing, and assistance with health care and other necessities to the many people who are still in need. Many churches are doing just that while Graham is busy whining and politicking. And he is way off base with his assertion that government is charge of health care. All government is doing is making it more affordable and accessible.

Where these paranoid Christianists constantly get the idea that they are under attack and likely to be defeated by some vague enemy is a persistent mystery. Aren’t they supposed to have an omnipotent, all-powerful God on their side? And even better, they have an omnipotent and all-powerful cable news network proselytizing on behalf of their Lord, who apparently has a bad PR agent and has to turn to Fox News.

And yet, with the help of God and Fox News they are still convinced that they will meet their doom at the hands of the infidels whom they greatly outnumber. So they are forced to take to the streets and inspire their believers to get politically active. And they run to Todd Starnes and Fox News to achieve that goal. It must be an awful burden to live constantly in fear of the handful of pagans that apparently are more formidable than their creator and savior. Maybe they should seek a mightier Almighty.