A couple of weeks ago Hillary Clinton correctly observed that Donald Trump has a “penchant for sexism.” He has demonstrated that repeatedly with his personal attacks on Megyn Kelly, Carly Fiorina, Rosie O’Donnell, and others. What’s more, he is a fierce opponent of a woman’s right to choose, and prohibiting pay and job discrimination based on gender. He is also on his third wife and wants to bang his daughter. In light of that record of misogyny, Clinton was actually pretty mild in her criticism.

What transpired next was a tirade of extraneous attacks from Trump directed at Bill Clinton’s decades-old infidelities that, while improper, do not in any way absolve Trump of his past and current repulsive behavior. It is merely an attempt by Trump to deflect attention from himself. And for that he has been getting plenty of help from Fox News. The network has endeavored to keep the focus narrowly on Clinton’s affairs with frequent stories dredging up the former president’s past, while ignoring Trump’s nauseating present.

Now a new poll conducted by Fox News shows that the result of this propaganda blitz may not be exactly what they intended. When women were asked who they thought was “more respectful of women” – Bill Clinton or Donald Trump – they responded overwhelming that it was Bill Clinton (55% to 31%). 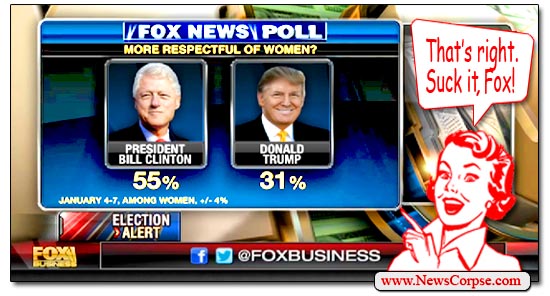 Despite all the hard work by Fox and Trump, American women still prefer Clinton over Trump by a wide margin. So what is Fox to do now? Well, of course, they will assemble a panel of conservative women to refute their own poll.

All four of the women called upon for this Fox Business Channel segment are hard-core wingnuts. They include a Tea Partier, a conservative columnist, a former Bush aide, and even Donald Trump’s national spokeswoman. With four opinions represented, Fox somehow could not manage to include a single Democrat or Clinton supporter who might actually have agreed with their poll. The “fair and balanced” network made sure that only one point of view was supplied. And the results would be comical if they weren’t so sad. Here are some of the highlights as these right-wing spinners attempt to roll back what America’s women actually think:

Katherine Timpf (National Review): It can’t just be about ‘Oh Bill Clinton’s a bad guy.’ It’s what does it have to do with Hillary? It has to do with, if you look back at the way that Hillary treated these women who were accusing her husband of sexual assault, so far beyond the opposite of this new liberal feminist idea of they have a right to be believed, rather she called them names that I could not say on TV without getting suspended. So we need to look at that, and do put the focus on Hillary, but how she’s related to what happened then because she played a direct active role there. It wasn’t just Bill. She did some things that make me sick. It all makes me sick.

That comes very close to infringing on Sarah Palin’s “Word Salad” copyright. Timpf has virtually implicated Hillary in her husband’s affairs. She also doesn’t bother to include a single bit of truthful commentary, particularly the assertion that Hillary used language that could not be used on TV. Although I will agree that Timpf does appear to be sick.

Katrina Pierson (Trump spokeswoman): You’ll recall that this didn’t come up until she called him a sexist. She was thumping that woman’s card very hard. […] When you’re looking at who is being respectful or disrespectful to women if you’re in the media today, then you’re probably not gonna think so much of Trump because people don’t really remember everything that happened with Bill Clinton. We’ve got an entire generation of people who are still trying to figure out what this discussion is.

If she thinks that people in the media today are not exceedingly well-versed about the controversies of the Clinton years, she’s acutely delusional. Obviously the women responding to the poll didn’t have any trouble figuring out what the discussion is, and they recognize a cad when they see one.

Gina Loudon (Tea Party): People have short memories, first of all, so there’s the psychological component of that. But also, like Katrina said, there are generations of people that don’t even know what happened, but if you ask them who’s more trustworthy, the numbers on Hillary not being trustworthy are terrifying. And this is the other thing – Donald Trump hasn’t even begun to campaign against Hillary Clinton. […] My guess, Charles, is that the minute he starts to unleash on Hillary, she won’t even know what hit her.

So Loudon’s position is that it’s the people who are too ignorant to realize how horrible Clinton is and how awesome Trump is. The young ones never learned and the old ones have forgotten. What a bunch of idiots these women voters are, according to Loudon. Furthermore, Trump has been campaigning against Clinton for months. He has called her the “worst Secretary of State in history” (although he used to think she was a “terrific woman” and said that “I really like her and her husband both a lot”).

Cathy Taylor (GOP strategist and former George W. Bush advisor): I think we’re gonna see the tide shift quite a bit as we see Donald Trump continues on his path and starts to campaign as more of a general presidential campaign versus a primary campaign. Let’s remember that he has not really focused on women yet. He’s been very good to women as a businessman. And when you look at policies and policy recommendations, because policies are going to be more favorable, as with any of the GOP candidates, than Hillary Clinton. And let’s remember, there’s good guys and there’s nice guys. Bill Clinton may be a nice guy, Donald Trump is much more of a good guy.

Ms Taylor may need to wipe a bit of the drool off her chin. Trump actually has focused a great deal on women in this campaign, and it’s all been derogatory. Especially his policies, which are pretty much the same as the rest of the GOP and firmly rejected by majorities of women. As for the distinction between a “nice guy” and a “good guy,” I can only respond – WTF? Is this a political campaign or high school?

The video of this discussion (below) opened with a clip of Republican pollster and self-proclaimed “Word Doctor,” Frank Luntz, saying that “Trying to tie Bill Clinton into Hillary doesn’t make sense,” and that “You cannot win this election without getting at least 45% of the female vote.” But Republican candidates are doing everything they can to alienate women (and Latinos and African-Americans). And Fox News is making a desperate effort to clean up after them. The problem is that their efforts are so ham-handed that no one is going to be convinced by the ultra-partisans who are clearly acting as Trump’s surrogates. What’s most revealing about this is that Fox will hold nothing back when their conservative principles are being challenged. The challenger must be destroyed, even if it’s themselves and their own poll.