The conservative response to criticism has always been a mixture of denial and accusations of liberal media bias. They have never been particularly adept at debating a subject on its merits and employing critical thinking skills to construct a coherent rebuttal. But now, during what may be one of America’s most hysterically delusional election seasons, right-wingers are falling into an abyss of paranoia. 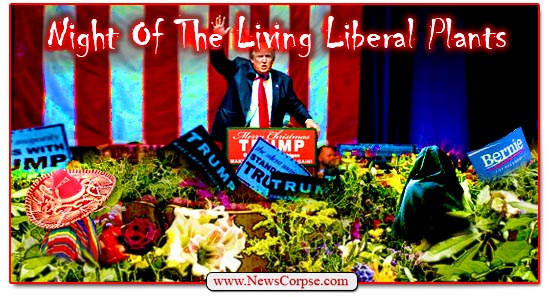 This week there were a couple of Republican campaign events that demonstrate how ludicrous the wingnut media have become. They both exhibited laughably dishonest methods of dismissing valid criticism and deceiving their audience.

The first occurred at a Donald Trump rally in South Carolina. During Trump’s standard spewing of thinly veiled hate speech, a woman in a turquoise blue hijab stood up in silent protest. Almost immediately the crowd began a vile chant of disapproval. Trump joined in and ordered her to be ejected from the hall. She was escorted out amid continuing taunts and insults, including one Trumpster asking her if she had a bomb. She responded wonderfully saying “No. Do you?”

The reporting of this disgraceful act of prejudice and intolerance of free expression made its way to the Fox News community website, Fox Nation, with a headline saying “Muslim Woman Removed From Trump Rally Used CNN To Coordinate Her Spectacle.” The story was sourced to the right-wing web-rag BizPac Review, who said that she had “disrupted the event.” How standing silently constituted a disruption was never explained.

More to the point, the article also never explained how she “coordinated her spectacle” with CNN. The only thing that tied these two events together was that she was interviewed by CNN after she was removed from the hall. That’s a fairly typical occurrence in this situation, and Fox News has made it a regular feature to interview people who protested President Obama or Democratic candidates. Nevertheless, in the minds of rightist crackpots, it was a plot designed by the liberal media cabal to force Trump into throwing a peaceful advocate for improving interfaith relations out into the cold.

On a side note, the story also mentioned that she was wearing a Jewish Star of David, but she was not. She did have an eight-pointed yellow star on her outfit with the word “Muslim” written on it (the Star of David has six points). This may have been a reference to the Nazi practice of forcing Jews to wear identifying patches, but since Trump has actually called for Muslims to be marked with identifying badges and cataloged in databases, the rightist media has no cause to complain about such messaging.

The other event this week was an appearance in Iowa by Sen. Ted Cruz. While taking questions from the audience a young Latina stood up to ask him about his policy on immigration. She said that she was “worried about whoever comes next to the presidency and what’s going to happen to people like us.” It was a heartfelt plea for understanding from someone who was clearly concerned about whether she would be able to remain in the country she loved and in which she was raised. Cruz adopted a mock compassionate tone while telling her that, if he becomes president, she will very likely be deported as a criminal because “violating the laws has consequences.”

It should be noted that this woman broke no laws. She was brought to the U.S. as a child by her parents and has distinguished herself by finishing school and working for a non-profit that assists children with special needs. She was even praised by GOP Rep. Steve King, a notoriously anti-immigrant Tea Party Republican who just happened to have met her previously and was impressed.

Once again, this story found a home at Fox Nation where they plastered on a headline reading “DNC DREAMer Plant Tries To Ambush Ted Cruz And It Backfires Miserably.” This article was sourced to something called Red Alert Politics and alleged that…

“The Democratic National Committee tried to entrap Cruz at a campaign event in Storm Lake, Iowa yesterday by having an illegal immigrant DREAMer named Ofelia Valdez confront the Texas senator.”

There was no evidence in the article that tied the woman to the Democratic National Committee. Apparently, just the fact that she asked a question that was less than a sycophantic exercise in kissing up to Cruz was enough to label her a plant. The reality that there are millions of people just like her isn’t sufficient to presume that she is merely a sincere constituent who is genuinely concerned about her future.

This paranoid behavior is nothing new for the right-wing press. Last September at a Trump rally, a man rose to complain about what he called “the Muslim problem” and asked “When can we get rid of them?” That led to an article in the ultra-conservative Daily Caller that baselessly alleged that the questioner was a plant. And the intrepid pseudo-journalists over at Breitbart News went even further to claim that they had found proof that consisted of a photo that was plainly somebody else entirely.

This is what happens when crackpot partisans abandon reason and rely on conspiracy theories and the blathering of fact-averse propagandists like Alex Jones, Bill O’Reilly, and Rush Limbaugh. It goes beyond conventional disinformation to a state of reduced capacity wherein the only response to criticism is to allege that your critics are members of secret societies bent your destruction. Because – well, of course they are. Can’t you tell? Or maybe you’re one of them.