The 2016 presidential election is shaping up to be the first Reality TV campaign. Not only is the Republican front-runner the former star of a washed up celebrity game show, but now the biggest endorsement of the year has come from another surreality crackpot, Phil Robertson of Dick…er…Duck Dynasty. 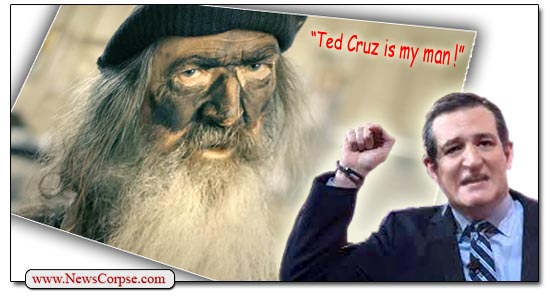 It may be a little bit of a surprise that Robertson didn’t back his fellow TV character, Donald Trump, but the philosophical synergies between Robertson and Ted Cruz, particularly with regard to faith and theocracy, were just to strong to resist.

Robertson has clearly found a spiritual brother in Cruz, whose father is a radical Christianist minister. Cruz shares Robertson’s hatred of gays, his opposition to women’s reproductive rights, his intense fear of Muslims, and, most importantly, his overwhelming lust for guns. Robertson, like Cruz, is an unabashed phony. They are both multimillionaires pretending to be salt-of-the-earth populists. Cruz even graduated from Harvard Law School, just like that Kenyan socialist Muslim, Barack Obama.

Cruz has expressed his appreciation for Robertson’s endorsement and even appears in the video making the announcement (see below). The video is one of the most peculiar political documents ever produced. It features Robertson, face painted with black camouflage as if for a perverse hillbilly minstrel show, outlining his criteria for a president.

“My qualifications for president of the United States are rather narrow: Is he or she Godly, does he or she love us, can he or she do the job, and finally would they kill a duck and put him in a pot and make him a good duck gumbo?”

I’m not sure when killing ducks became a prerequisite for national leadership, but we’re talking about the patriarch of the Duck Dynasty here, so there may be a conflict of interest. More notably, Robertson’s quaint allusion to a candidate “loving us” can only be properly understood to mean a very specific group of “us.” That’s because Robertson, who believes that African-Americans were all happy as clams in the Jim Crow south, has a distinct definition of who his people are. This is what he told the Conservative Political Action Conference last year:

“You know what’s happened GOP? We’ve got too many ‘any others’ in the White House. It [the Constitution] wasn’t written for them.”

It’s fortunate that we have Robertson to stipulate for whom the Constitution was written or them liberal elitists might have got folks to think it was for “We, the people.” And that’s the sort of government that we can expect from someone like Ted Cruz who similarly segregates Americans into “us” and “them.” He recently declared that “the overwhelming majority of violent criminals are Democrats.” And he said that shortly after having bragged about another endorsement from an abortion opponent who advocated murdering doctors and was himself affiliated with violent felons.

Watch this absurd video of Robertson and Cruz fraternizing in the outback and then just try to imagine Cruz in the White House.