Last night’s Republican debate was so tightly managed and rehearsed that it revealed almost nothing about any of the candidates. That is, unless you weren’t already aware that they hate President Obama, Hillary Clinton, immigrants, taxes, healthcare, Muslims, and generally believe that America is weak and in danger of being destroy forever by some desert rats. Other than that… 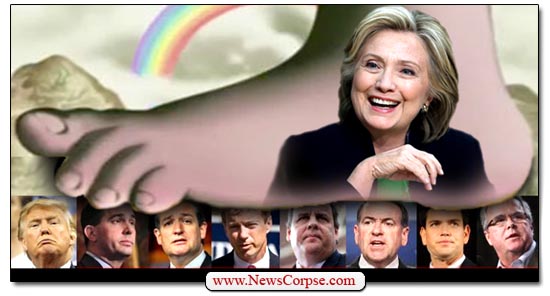 The severity of the GOP contempt for all things Democratic and progressive was in abundant display. So much so that it was causing the debaters to articulate a cacophony of utterly asinine rhetoric aimed at the absent objects of their disaffection. And as a public service, News Corpse has compiled a few of the worst mind farts of the evening.

Chris Christie starts us off with a chilling threat for the President saying that “We are going to kick your butt out of the White House come this fall.”

I’m sure Obama is shaking in his boots. Even though he knows that he will be living in the presidential abode until next winter. And when he leaves it will be because his second term has expired and not because of anything that Christie or his GOP goons might do. What’s more, there is a better than even shot that the next resident of the White House will be another Democrat, but a decidely long shot that it would be Christie.

Donald Trump is next and, as usual, gives us a rich buffet of stupid from which to choose. For now I’ll go with his answer to the question “Are there any circumstances that you think we should be limiting gun sales of any kind in America?” Trump said abruptly “NO!”

So The Donald is cool with the the unlimited sales of assault weapons, semi-automatics, automatics, grenade launchers, howitzers, etc. Additionally, his answer stipulates no limits on either guns or sales. So purchasers can be felons, or domestic abusers, or mentally ill, or terrorists. This is the sort of answer that can only come from someone who hasn’t bothered to think through the question. And wouldn’t that be a great attribute for a president?

Jeb Bush exhibited a unique form of delusion saying that “The idea that somehow we’re better off today than the day that Barack Obama was inaugurated president of the United States is totally an alternative universe.”

Does Jeb have the ability to recall that day seven years ago? The economy had just suffered its worst decline since the Great Depression. The stock market lost almost half its value. Unemployment soared to 10%. And some of the nations biggest financial and manufacturing concerns had to be bailed out by the government or disappear. Since then the stock market has more than doubled (even with the declines that occurred this week). Unemployment is down to 5%. America’s auto industry had its best year ever in 2015. Osama Bin Laden is quite dead, along with hundreds of other Al Qaeda and ISIS leaders. And yet, Bush seems to wish that we could return to the precarious position that his brother put the nation in due to his shoddy economic policies, tax cuts for rich, and embarking on two wars.

Marco Rubio is among the right-wingers who believe that there is nothing to fear but let’s all be afraid anyway. He fretted that “There is a war against ISIS, not just against ISIS but against radical jihadists terrorists, and it is a war that they win or we win.”

This is the same nonsense propounded by the rest of the GOP field. They actually think that under some bizarre circumstance ISIS could defeat the United States and compel our surrender. That is just ludicrous. Sure, they can do serious harm to individuals with terrorist tactics, but that’s a long way from a military defeat. The combined forces of Germany, Italy, and Japan could not beat the U.S. Only a an idiot would think that ISIS can.

Ben Carson didn’t add much to this debate. But he did preface his first answer by saying that “I’m very happy to get a question this early on. I was going to ask you to wake me up when that time came.”

The good doctor should know better than to open with a joke about falling asleep when the single most ridiculed part od his persona is that he seems to be on the verge of slumber at all times.

Ted Cruz seemed to think it would be a good idea to insult everyone in New York saying derisively that “I think most people know exactly what New York values are.”

Not only does that demean some twenty million Americans, it gave Trump an opening to play the 9/11 card. But this attitude isn’t new. Republicans have been openly hostile to much of America just because of political differences. They also hate Hollywood, San Francisco, Seattle, New Orleans, Austin, Chicago, Boston, and more. It’s a peculiar brand of selective patriotism.

These are the candidates that Republicans have to choose from. For the time being being they seem to be leaning toward the goofiest one in the bunch. And they don’t seem to care that Trump has based his entire campaign on self-exaltation, insults and lies (see the Trump Bullshitopedia). Maybe Republican voters are simply settling for Trump because the rest of the roster is equally ridiculous. They have resigned themselves to the fate that, if we’re gonna be stuck a preposterous candidate, why not go for the gold?