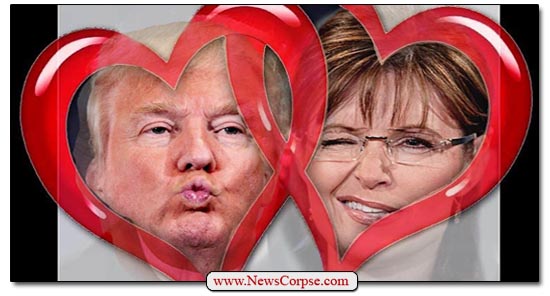 It was reported that Palin’s son, Track, was arrested for beating up his girlfriend and wielding an AR-15 rifle while intoxicated. But rather than going back home to attend to her families legal and emotional problems, Palin followed up her Trumpmania tour in Iowa with a another appearance in Tulsa, Oklahoma (video below). It was there that she brought up Track’s tribulations, without mentioning his name or his alleged crimes, as she sought to exalt her domestic abuser offspring as a hero saying…

“I can talk personally about this – I guess it’s kinda the elephant in the room – because my own family going through what we’re going through today with my son, a combat vet, having served in the Stryker Brigade, fighting for you all, America, in the war zone. But my son, like so many others, they come back a bit different, they come back hardened, they come back wondering if there is that respect for what it is that their fellow soldiers and airmen and every other member of the military so sacrificially have given to this country.”

It’s disturbing, to say the least, to hear Palin’s pontificating about the honor of America’s military in conjunction with the news that her drunken son punched and kicked a woman while brandishing a gun. That’s not exactly the best demonstration of military pride. And while it’s true that many veterans suffer from Post-Traumatic Stress Disorder, that is not an excuse for domestic abuse. And it should not be used to callously dismiss violence in a stump speech at a political rally. But Palin wasn’t through, and it got much worse.

“It’s a shame that our military personnel even have to wonder if they have to question whether they’re respected anymore. It’s starts from the top. The question though that comes from our own President where they have to look at him and wonder ‘Do you know what we go through? Do you know what we’re trying to do to secure America and to secure the freedom that have been bequeathed us?'”

So it’s Obama’s fault that Track Palin got drunk and put his girlfriend in the hospital? Somehow, in Palin’s view, the President is to blame for every veteran’s psychological problems. And she also seems to think that PTSD is caused by not being respected enough on returning from a war, rather than by the horrific experiences inherent to war. Palin thinks that if everybody would just thank a vet, then coping with the nightmare of battle and seeing your buddies blown to pieces would be a cake walk. And she still wasn’t finished.

“So when my own son goes through what he goes through coming back, I can certainly relate with other families who kinda feel these ramifications of some PTSD and some of the woundedness that our soldiers do return with. And it makes me realize more than ever, it is now or never for the sake of America’s finest that we have that Commander-in-Chief that will respect them and honor them.”

To Palin this is all about what her family “goes through.” Not once did she mention the victim and what she went through. Palin isn’t even denying what her son did. She is floating a possible insanity defense. In which case you might think she would have some sympathy for the victim. Instead, she ignores the battered woman, excuses her son’s violence, blames it all on the President, and closes with a brazenly political plea to vote for Donald Trump.

This sleazebag, with a son who is a divorced domestic abuser, a daughter with two out-of-wedlock kids from different fathers, a defender of the deviant Duggar family, a supporter of the racist Duck Dynasty Klan, and close friend of pedophile and advocate of presidential assassination Ted Nugent, presumes to lecture others on family values. And she campaigns for a racist, wannabe fascist tyrant who mocks the disabled even though she is the mother of a special needs child.

Has there ever been a more nauseating, heartless, self-promoting, ignorant, person in American politics? And yes, I’m talking about both of them – Palin and Trump. They are a perfect match of loathsome demagogues who feed off of each other and the dimwitted idolatry of their glassy-eyed followers. What a sick party the Republicans have devolved into.