Every now and then a crumb of truth falls from the lips of a Fox News propagandist, usually without him or her even knowing it. The latest example of that came last night when Bill O’Reilly sought to lay the blame for Ted Cruz’s dishonest campaigning at the feet of CNN. 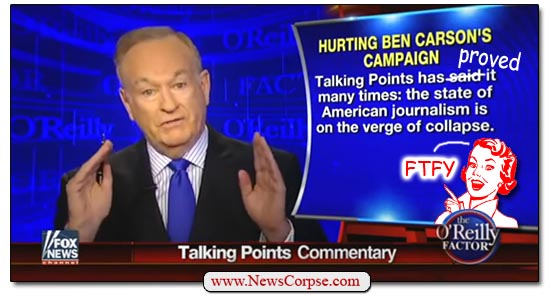 The backstory is that Cruz’s team spread a rumor that Ben Carson was ending his campaign just as the Iowa caucuses were about to begin voting. That news bite doesn’t really have much significance since Carson’s supporters would hardly move the dial on the caucus results. But it didn’t stop Donald Trump from making ridiculous claims that the tactic had hurt him and he was threatening to sue.

Now Bill O’Reilly is picking up the baton to beat CNN with (video below). He is making a wholly unsupported argument that it was CNN that created the whole controversy. O’Reilly began by asserting that CNN’s Chris Moody “tweeted misleading information about the Carson campaign.” That was O’Reilly’s first lie. Moody simply tweeted that “Carson won’t go to NH/SC, but instead will head home to Florida for some R&R. He’ll be in DC Thursday for the National Prayer Breakfast.” O’Reilly said that tweet was “Flat out untrue.” And if it weren’t for the fact that it was entirely true, O’Reilly would have been right.

Moody followed his tweet seconds later with one saying that “Ben Carson’s campaign tells me he plans to stay in the race beyond Iowa no matter what the results are tonight.” O’Reilly didn’t bother to report that and went on to assert that “There is no question that CNN is responsible for the false report.” But no matter how many times he repeats that lie, it will not become true. However, O’Reilly did stumble into a factual statement that deserves recognition:

“Talking Points has said it many times: The state of American journalism is on the verge of collapse. Ideology has permeated hard news coverage and honest reporting is becoming almost scarce. Especially in political circles.”

And if anyone should know about the scarcity of honest reporting it’s Bill O’Reilly. He has a trademark on it and he is demonstrating beautifully the collapse of American journalism. It’s funny that whenever anyone on Fox criticizes the dishonest media they seem to forget that the most significant new development in modern journalism has been the rise of Fox News. Ya think there’s a connection? The truth about the CNN report is that they relayed information about Carson that was unambiguously true. Moody’s tweets were totally accurate, and they were followed up on the air by CNN’s Dana Bash who said that…

Ben Carson is gonna go back to Florida, his home, regardless of how he does tonight here in Iowa. He’s gonna go there for several days and then afterwards he’s not gonna go to South Carolina, he’s not gonna go to New Hampshire, he’s gonna come to Washington, D.C. And he’s gonna do that because the National Prayer Breakfast is on Thursday […] If you want to signal to your supporters that you want it, that you’re hungry for it, that you want them to get out and campaign, you’ve gotta be out there and doing it too. And he’s not doing it. It’s very unusual.

She never said that Carson was suspending his campaign. She was simply reporting factually on his immediate schedule and the fact that most contested campaigns do not set aside several days to leave the campaign trail when so much is at stake. That doesn’t mean that he’s closing up shop. It just means that he might be taking a strategic risk. It was the Cruz campaign that spun that into a rumor about Carson calling it quits.

All of the facts enumerated here were available to O’Reilly at the time he broadcast his attack on CNN. He simply refused to pay attention to any fact that interfered with his predetermined intention to disparage his competitors at CNN. And he knows quite well that his ill-informed audience will eat up his lies without question.

After the news broke regarding Cruz’s smarmy tactics, Carson called on Cruz to demand the resignation of anyone on his staff who participated in spreading the rumor. However, today there is more news about the Carson campaign that wasn’t available previously. The Washington Post is reporting that Carson’s campaign funds are drying up and as a result he has fired 50% of his staff. Now that doesn’t necessarily mean that his campaign is over either, but it sure looks like it’s headed in that direction. And in the end, it may actually be the explanation for why he took the unusual step of heading home to Florida rather than going straight to New Hampshire.

6 thoughts on “Bill O’Reilly Says American Journalism Is On The Verge Of Collapse, And He Should Know”