In yet another display of acute ego-centrism, Donald Trump is threatening to sue over his loss in the primary caucus on Monday. This threat comes after he insisted that he was “honored” by having finished behind Ted Cruz and congratulating his opponents. It took less than forty-eight hours for Trump to revert to his native obnoxious personality and show himself for the sore loser that he is. 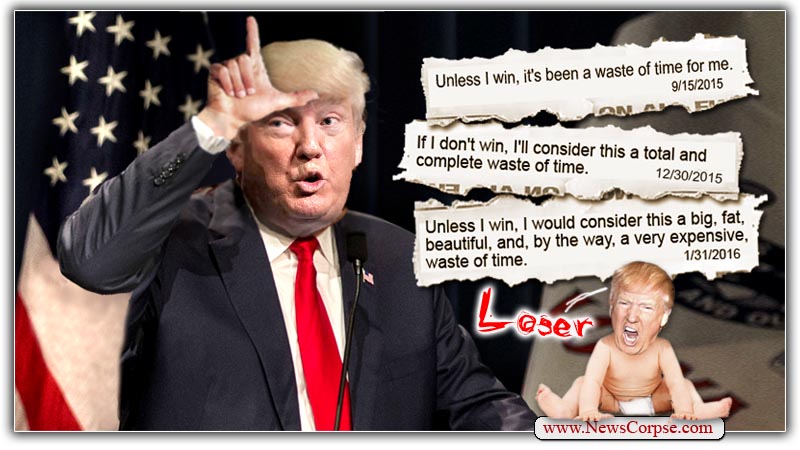 Trump’s whining began on Twitter where he absurdly demanded that the caucuses be done over or nullified. Then he quickly shifted to his natural inclination, which is to file a lawsuit against the fiends who would dare to cross him. That lawsuit is based on allegations that the Cruz campaign falsely asserted that Ben Carson was returning to Florida and suspending his campaign. Trump told Boston Herald Radio that it was …

“One of the most disgusting things I’ve ever seen. They said he was quitting the race and to vote for him.” and when asked if would sue, Trump responded “I probably will; what he did is unthinkable.”

If Trump thinks that this is one of the most disgusting things he’s ever seen, then he surely has not been paying very close attention to his own campaign’s racism and calls for violence. The tactic used by Cruz was definitely a sleazy move, but no more so than what is seen routinely in the rough and tumble of a political campaign. Especially among Republicans. It is reprehensible and should be remembered if Cruz becomes the nominee, but it is not actionable in court.

What’s more, Trump could not prove that he suffered any harm by this dirty trick. It was clearly aimed at Carson, and to the extent that it was effective, Carson was the victim. There is no plausible argument that any deceived Carson voters switched to Cruz rather than another candidate, including Trump. So Trump conceivably benefited from Cruz’s scam. And if Trump thinks that Cruz’s tactics are grounds for a lawsuit, then he is opening himself up to a countersuit from Cruz who has been legitmately harmed by Trump’s allegations regarding his citizenship and his eligibility to run for president.

For the record, Donald Trump is a serial litigator. He has filed numerous claims against former business associates, political foes, and public figures he feels have disparaged him. The list is illustrative of his tendency to bully anyone that defies or insults him. For instance…

There have been many other Trump litigations that go back decades as compiled by the Daily Beast. In most cases he is just beating his chest and trying to intimidate people. That is the behavior of a textbook Narcissist and wannabe dictator, which he appears to think is the position he is running for now.

It is truly astonishing that there is anyone in America who could actually consider voting for this jerkwad. His blatantly racist rhetoric, his childish insults, his brutish warmongering, and his ignorant pronouncements on economics, trade, law, and other components of governing, would be enough to scare any sane person away from his candidacy. But on top of that he has such a repugnant and unpresidential demeanor that it boggles the mind to imagine anyone who would want him representing this nation. Which leads me to conclude that the only thing more grotesque than Donald Trump is someone who would vote for him.