In the seven months that Donald Trump has been a candidate for the Republican nomination for president, he has succeeded in promoting bigotry, insulting his GOP colleagues, inciting violence, lying incessantly, and demonstrating an abject ignorance of every subject on which he speaks. His campaign has been a textbook example of how to offend and humiliate a political party and a nation. And now he has taken it another step over a line that he crossed months ago. 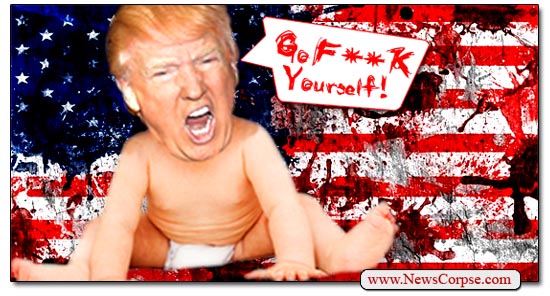 At a rally in New Hampshire, Trump was railing against local companies that moved their operations out of the country. This is a standard bit of chum that Trump throws to his bottom-feeders during his stump speeches. But in the course of expressing his distaste for off-shoring, he let loose an awkwardly whispered F-Bomb aimed at the New Hampshire business community.

This is the sort of dignified, presidential behavior that endears Donald Trump to his zealous followers. This is the type of character that many Republicans regard as appropriate for national leadership and diplomacy. This is a freakin’ embarrassment. How anyone can take this cretin seriously is a mystery that exceeds any comprehension.

And setting aside Trump’s boorish assault on decency, he doesn’t even come close to making any sense. The problem of off-shoring manufacturing is real and there are effective solutions available. But Trump isn’t addressing any of them. Instead, he is promising companies that return to New Hampshire a profanity-laced tongue lashing after they come back. He is riling up the locals to unleash their hatred on the prodigal employers. That is not exactly the sort of incentive that will persuade a rush back to the homeland. It does, however, illustrate how little Trump knows about international economics and trade. That was also shown as he continued this demented rant.

“It’s hard. We’re the highest taxed nation in the entire world. It’s hard for them to stay and they stay. Those are the ones we have to cherish and love. These people are great.”

So Trump cherishes the great people at the companies that stayed and he hates those that left, and he will tell them so as soon as he brings them back. But he excuses them somewhat by noting how hard it is to stay in “the highest taxed nation in the entire world.” And that would be a good excuse except for the fact that that it isn’t true. Many countries have higher effective tax rates for corporations and the U.S. rate is less than the average of all developed countries.

Not only is Trump wrong, he fails to acknowledge that his own businesses left the U.S. for cheaper labor in China and Mexico. If he wants to bring jobs back to America he could start now with his own suits and ties and other Trump-branded crap without being president. But this hypocrite has refused to do that even after it has been pointed out to him numerous times since he announced his candidacy. In fact, David Letterman pointed it out to him over three years ago

What he hasn’t refused to do is check his undignified conduct and incivility. In addition to this most recent profanity, Trump recently said that he would “bomb the sh*t out of ISIS.” Just yesterday he said “I was going to say [politicians] are really full of sh*t. But I won’t say that.” That was a demonstration of his passive-aggressive verbal abuse, something he used against his Fox News nemesis recently when he tweeted “I refuse to call Megyn Kelly a bimbo, because that would not be politically correct.”

[Update 2/8/2016: At a rally in New Hampshire Trump repeated something someone in the audience shouted about Ted Cruz (video). “She said he’s a p*ssy. That’s terrible,” Trump said, pretending to disapprove and demonstrating once again his oh-so presidential demeanor]

He just can’t help himself. Donald Trump is a classless, ignorant, bigoted, narcissistic, wannabe dictator. He would turn the United States into a reality TV joke. The respect for America that President Obama painstakingly restored following the disastrous administration of George W. Bush would be rolled back to lows our nation has never seen. And he would preside over a cult-like pack of disciples who exemplify the pathetic misanthropes who propped up Hitler.