Remember when Donald Trump was too chicken to face Fox News host Megyn Kelly in a Republican debate, so instead of participating in the last debate before the Iowa caucus he cobbled together a phony veterans benefit and pretended to raise money for the wounded warriors he professed to “love all over the place?” Well, a funny thing happened. 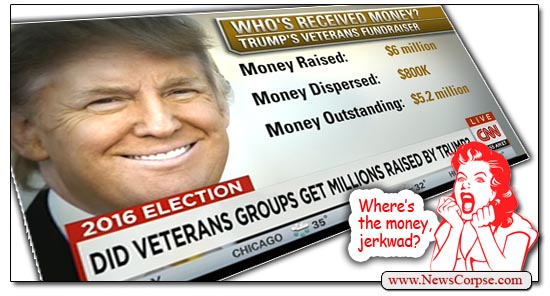 CNN decided to look into the distribution of the reported six million dollars that was raised to see if any of the twenty-two charities Trump listed as recipients had actually received any donations (video below). Their report revealed that, more than a month later, only about $800,000 of the six million dollars had found its way to the intended veteran beneficiaries.

CNN was initially told by the Trump campaign that the information about the funds was on his website, but after extensive searching that turned out not to be true. So CNN’s Drew Griffin called all of the listed charities to ascertain whether they had received any donations. Only seven organizations reported receiving any money. Griffin reported that…

“We have been asking, other news organizations have been asking, where’s the accounting of this? It’s a big dollar amount but it’s not high math when you’re dealing with hundred thousand dollar checks and six million dollars in donations. It should be easy to do. Charity Navigator, one of the groups that follows charities, says the money should have been disbursed by now. We continue to ask, but get no answers.”

This may be one of the reasons that several veterans groups announced that they would refuse to take any of Trump’s money before the bogus telethon began. Many people regarded the event as a political stunt that insulted America’s veterans by using them as campaign props.

What’s more, of the alleged six million dollars raised, four million came from four of Trump’s wealthy pals making one million dollar donations each. That’s two-thirds of the total that Trump raised with four phone calls that he could have made at any time, but never bothered. He only reached out to these donors when he needed an excuse to ditch the Fox News debate and the fearsome Megyn Kelly.

It remains to be seen where the rest of the money is and when or whether it will be disbursed. This delay further affirms that Trump is as insincere an advocate of veterans issues as he is about virtually everything else to which he shamelessly panders. It makes the release of his tax returns even more crucial as he has been accused of not being as charitable as he claims and is evading the disclosure of that by not releasing those returns.

Trump has never been regarded as a philanthropist. In fact, he is rather infamous for being the least charitable billionaire in the United States. With his purported billions of dollars he could easily have made a donation for the whole six million all by himself and disbursed it overnight by cutting a few checks. The fact that he hasn’t tells us just how much he really cares about veterans. To him they are merely another issue to exploit in order to get his way.