An African-American protester was sucker-punched today while attending a rally for Donald Trump in Fayetteville, North Carolina. Rakeem Jones was being escorted from the venue by sheriff’s deputies when a man in the audience suddenly swung at him hitting him in the face. This is becoming routine. 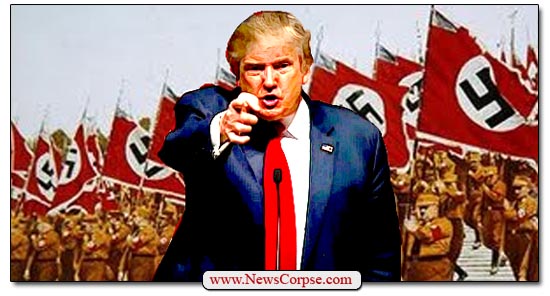 Surprisingly, the assailant was not taken into custody at the time of the assault, although he was found and arrested later. At that time he gave police a deranged story saying that he thought that Jones might be a member of ISIS because he was cussing. By that criteria Trump must be the leader of ISIS. The assailant was unapologetic saying that Jones deserved it and that “next time we see him, we might have to kill him.”

This unprovoked attack is just the latest incident of violence at a Trump event where hostility is openly encouraged by Trump. He frequently draws attention to protesters and makes derogatory comments from the stage. For instance, he once said that he would like to punch one in the face. He explicitly advised his followers to “knock the crap” out of other protesters. He reminisced about some longed for past when people exercising their right to free speech were “taken out on a stretcher.” He approvingly spoke of a protester who had been beaten saying that he deserved it.

What needs to be addressed at this time is that Trump may be civilly, or even criminally liable. His remarks are an open invitations to his glassy-eyed disciples to resort to violence against law abiding protesters. Even worse, on several occasions Trump told his followers that if they attacked a protester they wouldn’t have to worry about the legal consequences because he would “pay for the legal fees.” That’s more than an invitation. That’s a solicitation. It’s a promise of indemnity for a criminal act. And Trump demonstrated his awareness of the illegality by volunteering to cover the assailant’s defense.

During the Republican debate tonight, Trump was asked about the incident in Fayetteville. His reponse was a blatant lie that accused protesters at his rallies of being violent, dangerous, and causing real damage. However, there is not one single report of any protester being anything but lawful and, perhaps, briefly disruptive. Sadly, the CNN moderator, Jake Tapper, failed to point that out or to hold Trump accountable for his false and slanderous response.

It remains to be seen if the perpetrator in this case will take Trump up on his offer. If he does, Trump might have an obligation to follow through. He did promise to do so more than once. Should Trump agree to pay for the defense he would be in the awkward position of bankrolling a man who has confessed to criminal assault. Should Trump decline, the assailant might have a case against Trump. In any event, the assailant can cite Trump’s solicitation in his defense.

Finally, Rakeem Jones needs to know that the attack on him was not random. It was the result of a sustained effort to incite just this sort of violence. What Trump said in his stump speeches was precisely what he meant. Consequently, Trump should be held liable for soliciting the attack that Jones suffered. Hopefully Jones will engage an attorney who will make Trump pay for his reckless disregard for the safety of others.