Fox News blowhard, Bill O’Reilly, is very upset that “some in the media, both left and right, are portraying Mr. Trump as a 1930’s type fascist, and his supporters as budding brownshirts.” Now why would anyone ever suggest such a thing about Donald Trump and his legion of glassy-eyed disciples? 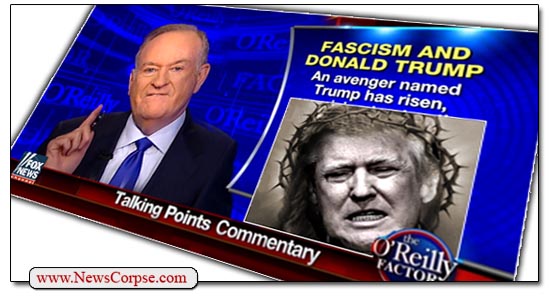 Just because Trump has initiated a campaign of hate directed at Latinos, African-Americans, and Muslims in much the same way that Hitler demonized Jews; just because he has called for massive deportation programs for undesirables; just because he has promised to order the military to commit war crimes by targeting the families and children of terrorists; just because he advocates marking Muslims with badges and cataloging them in government databases; just because he has encouraged violence against Americans protesting at his rallies and promised to pay for the legal defense of his followers who assault them; just because of that, where would anyone get the idea that Trump and his supporters were reminiscent of Nazi fascists?

O’Reilly devoted his Talking Points Memo segment to defending Trump, his long-time personal friend, from critics who simply point out the truth about Trump’s repulsive hate mongering. He began by explaining the reasons why many Americans are supporting Trump. In O’Reilly’s view it is because of an array of hoary tropes that he and other lock-step conservatives have been lobbing at liberals for years. He rattled off these subjects as reasons for Trump’s popularity.

That reads like a program summary for a Rush Limbaugh radio show. It’s a fairly comprehensive itemization of the meritless wingnut griping that goes on everyday on Fox News. But it has absolutely nothing to do with Donald Trump. This is just O’Reilly’s way of re-iterating his own festering laments and baselessly attributing them to Trump’s ascendancy in the GOP. And after laying out this nonsense, O’Reilly re-introduces Trump as the savior and a Messianic figure:

“In the face of all that an avenger named Trump has risen promising to stop the madness and giving blunt voice to millions of angry Americans.”

O’Reilly goes on to dismiss any relationship between Trump’s ultra-rightist agenda and the fascism it clearly recalls. He argues that Trump is merely representing a strain of “furious dissent.” That doesn’t remind anyone of Hitler, does it? And referring to the endorsement of Trump by America’s white supremacists, O’Reilly waves it off as merely “some bad people” exploiting his campaign. What O’Reilly fails to address is why Trump’s campaign is so ripe for exploitation by the KKK. Not stopping to consider that, he immediately shifts to a ludicrous comparison to Bernie Sanders.

“The same thing is happening with the Bernie Sanders crew. Some haters are supporting Bernie Sanders in order to tear down marketplace freedoms and inflict pain on prosperous Americans.”

Haters? The people O’Reilly is slandering as haters are the majority of Americans who are tired of wealthy elites (like O’Reilly) hoarding all of the economic opportunity and prosperity in the nation. Contrary to being motivated by hate, as Trump’s followers admit, the Sanders “crew” are driven by a desire to see all of their fellow citizens enjoy the benefits of our nation’s rich heritage. And what O’Reilly characterizes as inflicting pain on the prosperous is more like demanding that they pay their fair share. It can hardly be called pain if the Koch brothers are forced to get by on a mere $39 billion rather than $41 billion (the horror).

And here’s where it gets weird. O’Reilly concluded on the point that “charges of racism and fascism are easy smears designed to stop freedom of expression and stifle debate.” He, of course, would never resort to such a tactic and is visibly perturbed that others would dare to express themselves in such a repugnant manner. Well, that is until his next sentence:

“It’s funny, because the people that are doing this, they’re using techniques that the Nazis used. By them calling Trump a Nazi, and his supporters little brownshirts, they’re doing the same thing that Goebbels, who was the Minister of Propaganda, that Adolf and all of those boys did.”

That’s right, immediately after condemning people for calling Trump a Nazi (with ample justification), and asserting that such language was a tactic “designed to stop freedom of expression and stifle debate,” O’Reilly calls Trump’s critics Nazis. Is O’Reilly trying to stop their freedom of expression and stifle debate? His guest for the segment, Bernard Goldberg, giggled as he agreed with O’Reilly. Then he elaborated to say that “if their are any brownshirts in this country it’s liberals on college campuses.”

So now they’ve both called liberals Nazis after just complaining that such rhetoric was tantamount to suppression of speech. This is what passes for informed commentary on Fox News, the network that literally created Donald Trump and has gifted him with more than twice as much airtime as his Republican rivals. Having a close friend like O’Reilly is paying dividends for Trump, who is also afforded privileges on Fox News that other candidates are denied. For instance, live, uncut coverage of every stump speech; permission to phone in interviews; and uncritical reporting of his numerous, flagrant lies (see the Trump Bullshitopedia).

Trump knows that he has Fox News, and much of the rest of the press, wrapped around his abnormally short fingers. They are lapping up his bigotry in exchange for ratings. That was even admitted by the president of CBS who recently said that “It may not be good for America, but it’s damn good for CBS.” And that pretty much sums up the treasonous attitude of the corporate media.