Leave it to Fox News to turn the most slammin’, sloshin’, party holiday of the year into an opportunity to demean a civil rights movement devoted to saving lives and improving relations with society’s institutions. 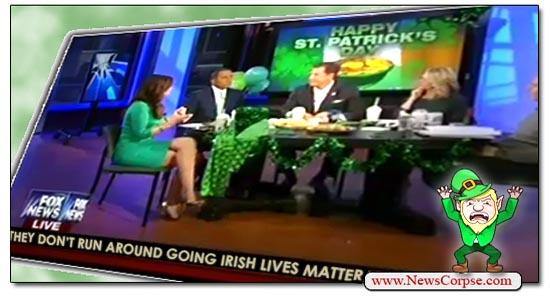 Today’s episode of “The Five” opened with an extended segment of the panel’s tribute to St. Patrick’s Day by parading an array of everything they could find that was painted green, including donuts, milkshakes, and tacos. But it didn’t take long for them find a way to devolve into the offensive rhetoric that is the hallmark America’s rightist wingnut network. Somehow a light-hearted discussion about green beer and leprechauns led to the following exchange between Juan Williams and Kimberly Guilfoyle:

Juan Williams: Irish people were stereotyped and denigrated for a long time.
Kimberly Guilfoyle: And the Irish got over it. They don’t run around going Irish Lives Matter

Fox host: The Irish got over being "stereotyped and denigrated"….."They don't run around going Irish Lives Matter" pic.twitter.com/5yJPCiaElC

This is one of those times when screaming at the TV just isn’t sufficiently satisfying. Guilfoyle actually believes that there is a coherent equivalence in America today between the current state of prejudice experienced by African-Americans and the Irish. She thinks that her snide mockery of Black Lives Matters makes a cogent point about civil rights.

Fox News, of course, has a history of being openly biased, and St. Patrick’s Day has been the springboard for it before. A couple of years ago the Guinness Beer company made a principled decision to skip New York’s St. Patrick’s Day parade because the LGBT community was prohibited from participating. That led Rupert Murdoch to tweet…

“Where will this end? Guinness pulls out of religious parade bullied by gay orgs who try to take it over. Hope all Irish boycott the stuff.”

At the time, News Corpse spelled out all the reasons that tweet exposed Murdoch as being either senile or drunk. Not the least of which is his ludicrous suggestion that Irish Americans, or any other celebrant, is going to abstain from drinking the most famous Irish beer in the world on St. Patrick’s Day. And as if to rub it in that Murdoch is a raging fool, last year Ireland voted to legalize same-sex marriage and gays proudly marched in this year’s parade. 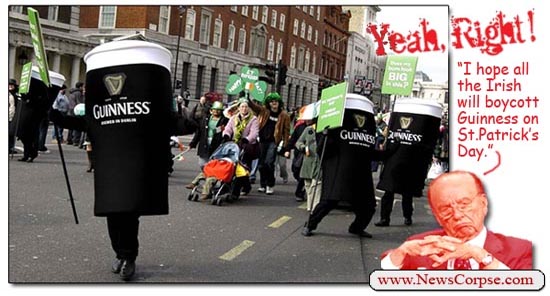