A couple of months ago Donald Trump put together a campaign stunt aimed at distracting the media and the public from his cowardly refusal to face Megyn Kelly in a Republican primary debate hosted by Fox News. After running away from the debate he frantically cobbled together a benefit that he said would aid various veterans’ groups. 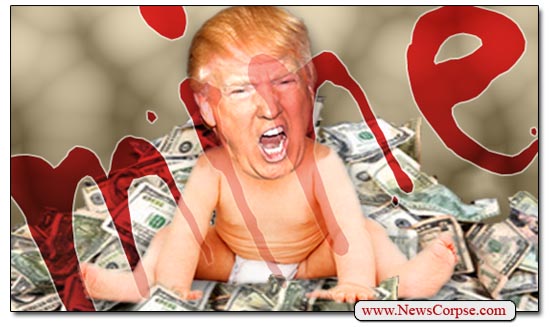 However, a month after the alleged benefit, CNN reported that most of the groups cited by Trump as beneficiaries had not received any of the money raised. A mere $800,000 of the reported $6 million was said to have been disbursed. Well now another month has gone by with little change in the situation.

According to a new report by the Wall Street Journal, “the targeted beneficiaries are still seeing a fraction of the promised money raised from the Republican’s charitable foundation and his wealthy friends.” So two months after the fake benefit, Trump is still hoarding the money he claimed was being collected for the veterans he professes to love. This is typical of Trump who is famously known as the least charitable billionaire in the United States. But this isn’t just a matter of being stingy, because this isn’t Trump’s money. It is money pledged by others for the benefit of veterans. Philanthropy experts have affirmed that these funds should have been disbursed long ago.

This may be one of the reasons that several veterans groups announced that they would refuse to take any of Trump’s money before the bogus telethon began. Many people regarded the event as a political stunt that insulted America’s veterans by using them as campaign props. What’s more, there have been reports that Trump has conditioned receipt of the donations on the recipient endorsing his campaign or appearing at his events. And even groups that have seen some benefit from the publicity have also noted that they have lost backers due to the association with Trump.

Once again, Donald Trump is demonstrating an utter lack of ethical conduct, in this case to the detriment of veterans. His campaign has consistently proven that he is only interested in what benefits him and he will shamelessly pander to whomever he thinks he can exploit to his own advantage. What’s really startling is that there are still people who can’t see through his obvious insincerity. That’s the sort of behavior that is observed in cults, and the Trump Cult has been pretty effective in deceiving weak-minded Americans.