This week the venerable PBS children’s program, Sesame Street, made a historic addition to its cast of lovable characters. For the first time in its decades long run an Afghan girl will join the Muppets for its broadcast in the Afghanistan version of the show. Zari is six years old and is excited about the opportunities she will have to learn and make new friends. But not everyone feels the same way. 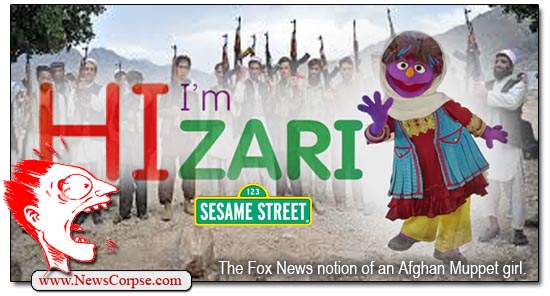 The news of Zari’s debut has produced the all too predictable rash of bigotry that we’ve all come to expect from the conservative hate mongers who believe that all Muslims are terrorists. Apparently this also applies to cloth puppets of children on educational TV. What they are afraid of was announced by the producers in this press release and video:

“Sesame Workshop unveiled today its first Afghan Muppet, Zari, a curious and eager six year-old girl, who will make her debut in season five of Baghch-e-Simsim—the local co-production of Sesame Street. Zari, whose name means “shimmering,” will be featured in new, locally produced segments that focus on curriculum topics like girls’ empowerment, national identity, physical health, and social and emotional well being.”

Sounds terrifying, doesn’t it? What’s more, Sherrie Westin, Executive VP of Sesame Workshop, told reporters that Zari “is modeling for young girls that it is wonderful to go to school and that it’s OK to dream about having a career.” In a country where girls are often discouraged, or even forbidden, to attend school, this should be welcomed as progress toward a more inclusive society. It’s an example of American media having a positive influence on some of the more oppressive cultural aspects of other countries.

Unfortunately, the hatred that infects the right-wing in this country is at least as oppressive as the Taliban. A few of the headlines generated by conservative media include knee-jerk condemnations like “Sesame Street Uses New Muslim Muppet, Zari, To Indoctrinate Kids,” “Sesame Street Goes Halal, Incorporates Sharia Law & Islam Into New Episodes,” and “Sesame Street Afghanistan Gets New Female Muslim Puppet: ‘Asalaam Alaaikum'” Of course, much what they allege is simply untrue. Zari is identified as Afghan, not Muslim. And there is no indication that religion or Sharia Law will play any part in the character’s role on the program.

Some of the more heated criticisms of Zari are centered on what the wingnuts regard as hypocrisy for having a girl represented on the program despite the sexism that exists in that part of the world. This is an utterly absurd argument. First of all, if they were really worried about the place of women in Afghan society they should be thrilled that a TV show is working to improve the situation by advocating for more education and opportunity for girls and women. Secondly, it’s the wingnuts who are the hypocrites. They are as dismissive of women as many of the Muslims they castigate. Take a look at the type and tone of complaints they level at American women in politics, including Hillary Clinton. For the record, a ranking of the proportion of legislative seats held by women in 213 countries puts Afghanistan at 49. The United States is 94th – below Kenya (93), Saudi Arabia (92), and Pakistan (83), to name a few.

Nevertheless, the rightist bigots are flying off the rails with vile insults directed at a make-believe character in the form of an adorable puppet. They make insinuations about her being fitted with a suicide vest or preparing to engage in a jihad. This sort of xenophobic zealotry was particularly notable at the home of brain-dead bias, Fox Nation. As usual, the commenters there spoke for the community of American bigots with their customary flare for blind hatred (see The Collected Hate Speech Of The Fox News Community). 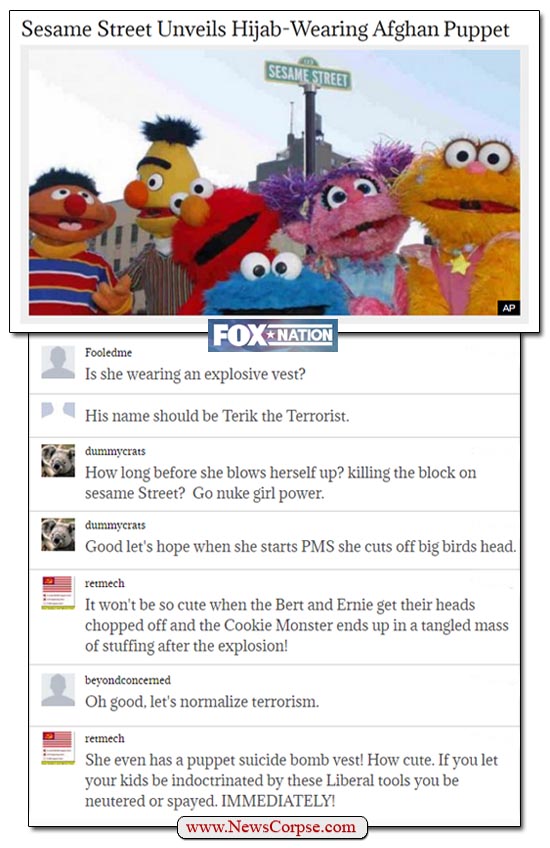