The Republican primary this year has affirmed what many people have known about the party for decades. It is dominated by boorish, judgmental, demagogues who are determined to deceive the American public into believing that they benefit when the rich get richer. The emergence of a billionaire reality TV game show host as their front-runner puts an exclamation point at the end of that sorry state of affairs. 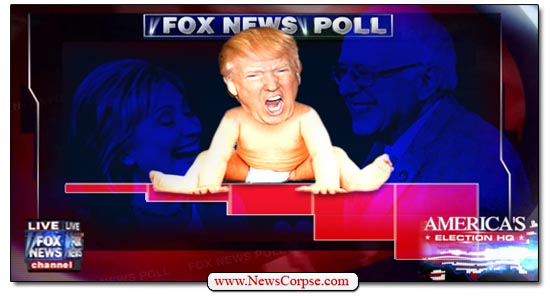 Now a new poll from (of all places) Fox News tells us more of what we already knew if we were paying attention. Donald Trump really is an ignorant blowhard with the highest unfavorable rankings ever recorded. Fox News begins their article detailing the poll results saying that…

“Majorities of American voters think Republican front-runner Donald Trump lacks the knowledge, temperament, and the likeability to be an effective president.”

No shit! This has been obvious since Trump announced his candidacy with a speech that demeaned immigrants as rapists and criminals. It has been manifest in his relentless insults directed at minorities, liberals, women, and even his own party peers. Still, it’s useful having confirmation of this from the media mouthpiece for conservative politics and Republican PR, Fox News.

The survey asked several questions related to the fitness of the candidates to hold the office of president, and Trump fared dismally in every one of them. On whether the candidate has the knowledge to serve effectively as president, Trump scored lowest with only 38% saying that he did. Clinton had a large majority of 63%, and Sanders also had a majority of 58%.

On whether or not the candidate has the integrity to serve effectively as president, Trump flopped with a mere 40%, still way below his Democratic rivals: Clinton 48%, Sanders 70%.

On whether or not the candidate has the temperament to serve effectively as president, Trump underperformed again with an embarrassing 33%. Clinton and Sanders pulled in 62% and 68% respectively.

Finally, the survey asked if the candidate is likeable enough to serve effectively as president. And again, to no one’s surprise, Trump sat at the bottom with 41%, while Clinton drew 52% and Sanders soared at 71%.

On a couple of other issues addressed in the survey, Trump was similarly situated at the low end. Americans would trust both Clinton and Sanders more (53%) when negotiating with Vladimir Putin, than Trump (40%). And when asked about whether the candidate would make them proud, the highest response to “Not at all” went to Trump (56%). And while the poll found that 64% of the respondents think that the Democrats have been “generally polite and respectful” throughout the primary, 80% of them think that the Republicans have been generally rude and disrespectful.

It’s significant to note that this poll is not just an expression of general distaste for all politicians, because the abysmal numbers for Trump are unique. They are matched by majorities with favorable views of the Democrats. There isn’t an across the board anti-government sentiment.

So according to the Fox News poll, the leading light of the GOP, and the standard bearer for Republican politics, is regarded by majorities of the population as too ignorant, too lacking in integrity, too temperamental, and too obnoxious to be President of the United States.

What a surprise. The man who can’t articulate a single coherent thought on domestic or foreign policy; who insults anyone who has the temerity to criticize him; who whines like a baby whenever things don’t go exactly the way he wants; who advocates violence against protesters at his rallies; who brags incessantly about how awesome he thinks he is; that man is not particularly well thought of by most Americans. That’s a very good sign of the astute character judgment of the American people.

However, it’s also a very frightening sign of the deranged minds of the people who are such loyal followers of the Trump cult. Where will they go when he eventually flames out? Right back into the mainstream of the Republican Party with the rest of the zombie Tea Party fanatics and white supremacists. And that is a very bad sign indeed.

5 thoughts on “Fox News Poll: Donald Trump Is An Ignorant Snot Who Nobody Likes”