It won’t surprise anyone to learn that Fox News has jumped aboard the Donald Trump bandwagon in a big way. His most ardent supporters are featured regularly to exalt the presumptuous Republican presidential nominee. Those supporters include the anchors of Fox’s most watched programs in primetime. 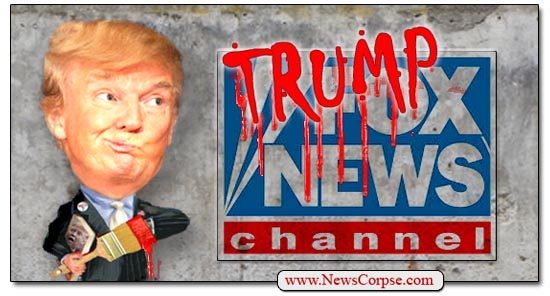 This past week Fox News handed over its primetime schedule to hour-long specials dedicated to Trump. Every single program set aside all other news stories for an episode of fluffing their favorite candidate. This is unprecedented even for Fox. It comes just a week after the chairman of the Fox News empire, Rupert Murdoch, was reported to have embraced Trump’s candidacy. New York Magazine’s veteran Fox-watcher, Gabriel Sherman, revealed that…

“According to a half dozen sources familiar with Murdoch’s thinking, the media mogul has signaled he plans to fully back Trump in the general election against Hillary Clinton.”

So it’s no coincidence that the following week Fox’s schedule is littered with packaged profiles of Trump that add nothing to the viewer’s store of knowledge or ability to make an informed decision. Here is what Fox’s primetime offered up last week as a gift to Donald Trump:

Van Susteren devoted the whole hour of her show to interviews with Trump’s family, She spent the most time with his wife Melania whose relentless praise was reminiscent of victims of Stockholm Syndrome. She even said that she and Donald never argue. Does that sound like a normal marriage or a paid campaign infomercial?

This episode of the Kelly File was partly a rebroadcast of “Megyn Kelly Presents,” the widely panned special that aired on the Fox Entertainment Network. There was some additional footage included that was left out of the original broadcast and, having seen it, Kelly was right to have cut it in the first place. It contained nothing new or interesting.

Not wanting to be left out, O’Reilly cobbled together a bunch of old interviews and presented them as a package for any of his viewers who haven’t seen enough of Donald Trump on television lately. O’Reilly and Trump are old pals and the interviews are a tribute to the sort of softball journalism that you would expect between friends.

And Then There’s Sean Hannity

To his credit, Hannity is the only one of the four primetime hosts who actually bothered to deliver a significant amount of new material featuring Trump. Of course it was substantially the same as everything that Hannity has delivered in the past. He has the distinction of having provided Trump with more airtime than any other program on Television (over 17 hours). To illustrate how much time that is, Fox & Friends came in second with less than half that amount.

Since Trump just surpassed the number of delegates necessary to clinch the GOP nomination, we can expect much more of this hero worship from the folks at Fox News as the general election unfolds. The network that has been pretending to be “fair and balanced” for the past twenty years is wholly engaged in their mission to smear Hillary Clinton and elect Donald Trump.

While Clinton has not made herself available to Fox with much frequency (she did appear on Fox News Sunday recently), there is nothing stopping them assembling a packaged piece like these ones that they did for Trump. And maybe that’s for the best because, if they did, they would likely accuse her of blowing up the Hindenburg or assassinating Lincoln.