The Republican Party long ago committed itself to a position on climate change that is at odds with reality. The question is settled with 97 percent of the scientists who study the subject agreeing that climate change is occurring and that it is caused by human activities. But that hasn’t stopped faith-based GOP politicians, with help from the Fox News propaganda machine, from rejecting the voluminous data validating the unprecedented scientific consensus. 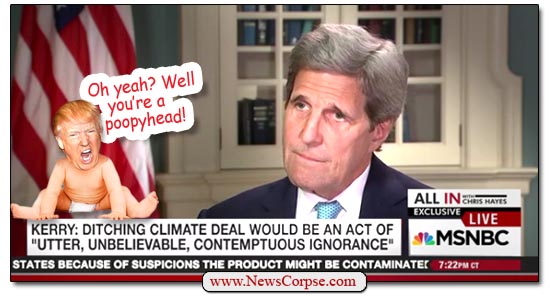 Leading the brigade of science deniers is the Republican nominee for president, Donald Trump. In a widely ridiculed comment he called climate change a hoax that “was created by and for the Chinese in order to make U.S. manufacturing non-competitive.” He advocates anti-environment policies such as eliminating regulations on energy exploration and production, opening up federal lands to oil drilling, and building the KeystoneXL pipeline. He promises to shut down the Environmental Protection Agency (EPA), which he thought was called the Department of Environmental (DEP?). And most recently he said that he would rip up the United Nations’ historic Paris climate agreement that currently has 177 signatories.

Responding to Trump’s attack on the Paris accords, Secretary of State John Kerry was interviewed on MSNBC’s All In with Chris Hayes (video below). He did not mince words when asked about Trump’s hostility toward the international effort to mitigate the catastrophic effects of climate change:

“Ripping up the climate agreement that was reached in Paris would be reckless, counterproductive, self-destructive. It would be an act of extraordinary danger to our country because of the path it would put us on both in terms of our global leadership on the issue as well as the actual policies we need to implement and it would in the end be an act of ignorance, of utter unbelievable contemptuous ignorance to get rid of something that the world has worked for since 1992 in Rio.”

Kerry didn’t stop there. He addressed the fact that each of the past years and decades marked record highs in global warming and were each hotter than those that preceded them, poignantly noting that “Somewhere people ought to be catching on to what is happening.” Along with the obvious and harmful impact of rising temperatures and sea levels, there is an alarming threat to national security. Kerry summarized this threat saying:

“Refugees that are being created in various parts of the world as a result of lack of water, or fights over food, or the fact that they have to move from where they live today. To talk about casually, without even understanding the work that has gone into it or the rationale for it, ripping it up would be one of the most reckless irresponsible, historically wrong acts I can think of.”

Conservative opponents of environmental reforms frequently try to belittle proponents as prioritizing climate change over terrorism. Of course, there is no reason why both issues cannot be tackled simultaneously. More to the point though, climate change actually is a more ominous threat that has the potential to instigate bloody wars and wipe out billions of people. Terrorism is unquestionably a tragic reality that requires a determined effort to defeat, but it does not approach the scale of climate change for global disaster. This was realized by no less a figure of right-wing stature than former George W. Bush defense secretary, Donald Rumsfeld. The Rolling Stone published a comprehensive examination of “The Pentagon & Climate Change: How Deniers Put National Security at Risk,” that cited Rumsfeld:

That leaves Donald Trump and his ilk to be the standard bearers of an utterly delusional rejection of the dangers that face a planet that is rapidly heating up, both in terms of temperature and hostility. Kerry characterized Trump’s denialism perfectly by labeling it reckless and ignorant. Unfortunately the Republican Party is now Trump’s plaything and they can be expected to wholly embrace his ignorance with enthusiasm and obedient blindness.

John Kerry: Tearing up climate deal would be "an act of extraordinary danger to our country" https://t.co/tH5YimoCeh