Hillary Clinton was in San Diego, California, today to deliver an address on national security. And while the speech she gave enumerated her priorities for a Clinton presidency, it began with a masterful indictment of her presumptive Republican opponent Donald Trump. Anyone who is interested can read the transcript of entire speech here, but what appears below is just a portion of the speech’s opening that nailed Trump to the wall. It seems appropriate that this be documented for all voters to reference as the campaign moves forward.

[Update 6/3/2016: Trump has responded via tweet (his favorite means of communication). He said “In Crooked Hillary’s telepromter speech yesterday, she made up things that I said or believe but have no basis in fact. Not honest!” So I added links to the evidence of his actual statements. Hillary Clinton also posted annotated support for her remarks] 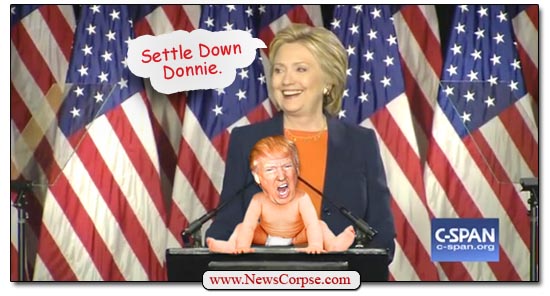 Americans aren’t just electing a President in November. We’re choosing our next commander-in-chief – the person we count on to decide questions of war and peace, life and death. And like many across our country and around the world, I believe the person the Republicans have nominated for President cannot do the job.

He is not just unprepared – he is temperamentally unfit to hold an office that requires knowledge, stability and immense responsibility.

This is not someone who should ever have the nuclear codes – because it’s not hard to imagine Donald Trump leading us into a war just because somebody got under his very thin skin.

We cannot put the security of our children and grandchildren in Donald Trump’s hands. We cannot let him roll the dice with America.

This is a man who said that more countries should have nuclear weapons, including Saudi Arabia.

This is someone who has threatened to abandon our allies in NATO – the countries that work with us to root out terrorists abroad before they strike us at home.

He believes we can treat the U.S. economy like one of his casinos and default on our debts to the rest of the world, which would cause an economic catastrophe far worse than anything we experienced in 2008.

He has said that he would order our military to carry out torture and the murder of civilians who are related to suspected terrorists – even though those are war crimes.

He says he doesn’t have to listen to our generals or our admirals, our ambassadors and other high officials, because he has – quote – “a very good brain.”

He also said, “I know more about ISIS than the generals do, believe me.” You know what? I don’t believe him.

He says climate change is a hoax invented by the Chinese, and he has the gall to say that prisoners of war like John McCain aren’t heroes.

He praises dictators like Vladimir Putin and picks fights with our friends – including the British prime minister, the mayor of London, the German chancellor, the president of Mexico and the Pope.

He says he has foreign policy experience because he ran the Miss Universe pageant in Russia.

And to top it off, he believes America is weak. An embarrassment. He called our military a disaster. He said we are – and I quote – a “third-world country.” And he’s been saying things like that for decades.

Those are the words my friends of someone who doesn’t understand America or the world.
And they’re the words of someone who would lead us in the wrong direction. Because if you really believe America is weak – with our military, our values, our capabilities that no other country comes close to matching – then you don’t know America.

And you certainly don’t deserve to lead it.