Cleveland, Ohio is the home of the Rock and Roll Hall of Fame. It will also be the site of the Republican National Convention next month where the GOP will nominate Donald Trump as their candidate for President of the United States. And those two worlds are about to collide as the supergroup, Prophets of Rage, prepares to invade the city just in time for the GOP’s festivities. 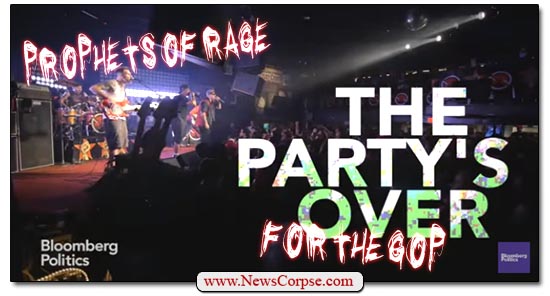 Prophets of Rage is a musical collaboration that includes Tom Morello of Rage Against the Machine, Chuck D of Public Enemy, and B-Real of Cypress Hill. Their mission is to “Make America Rage Again.” While all of these musicians, and the bands they represent, are epic rockers, they are also committed progressive activists who fight on behalf of the poor, the homeless, victims of discrimination and abuse, and all the rest of the 99 percent who are too often forgotten by conventional politicians. As Morello told interviewers John Heilemann and Mark Halperin of Bloomberg News, “The times demand a band like Prophets of Rage to rise.” And in the spirit of that, the Prophets just announced that they will be making the pilgrimage to Cleveland to “cause a ruckus” at the GOP convention:

“Well there’s a thing called the Republican National Convention in July, and that will be a perfect place for a band like Prophets of Rage to cause a ruckus, and we will be there on the streets, in the field,” Morello said. “We have a venue and there may be venues that will be spontaneous venues, it’s hard to say. This is the kind of thing you don’t broadcast to the local authorities prior to arrival.”

The prospect of these radicals popping up unexpectedly in the streets of Cleveland might be cause for the Republican Party establishment, and the local police department, to worry. But the GOP convention has already been threatened with riots by none other than their presumptive nominee. In March Trump told CNN that if he didn’t get the nomination at the convention “I think you’d have riots…I think bad things would happen.”

Morello spoke about the group’s view that politics as usual is insufficient to meet the crises that the nation and the world faces today. He found blame enough to go around for both parties saying that staking all of your hopes on hope isn’t going to work, but that “xenophobic, fear-based racism” isn’t going to work either. He complained that the narrative in the media that portrays the electorate as angry misconstrues the message:

The Republican convention promises to be an entertaining affair, and not just because their pending leader is a bombastic, controversy-baiting, former reality TV star who thrives on the adoration of his glassy-eyed followers. Donald Trump has incited his supporters to violence while casting venomous insults at his perceived enemies, usually women and minorities. As Sen. Elizabeth Warren noted, there is “more enthusiasm” for him “among leaders of the KKK” than leaders of the GOP.

So expect the convention to reflect those values, the values of their standard bearer. While Prophets of Rage will be stirring up emotions and inspiring grassroots activism outside the convention hall, the delegates inside will be fighting among themselves for an agenda of division and hate. At least we’ll get some awesome music out of it.