Gwen Ifill of PBS recently asked President Obama “Why don’t you mention Donald Trump by name?” The President playfully answered that “You know he seems to do a good job mentioning his own name.” And while that’s a reasonable position for the leader of the Democratic Party to take, it is a wholly different matter when the Republican’s official Internet site is so ashamed of their candidate that his name can’t be found on its home page or any linked pages. 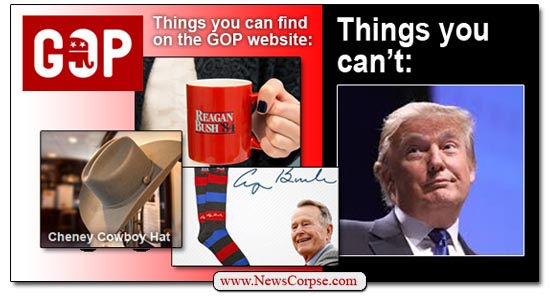 A visit to GOP.com reveals that Donald Trump’s name is nowhere to found. Nor can he be found by clicking on the available links. Trump may not yet be the official nominee of his party, but given the fact that all of the other candidates have dropped out, and the party refers to him as their candidate, it is somewhat curious that he’s not mentioned on the party’s website. What are they ashamed of? And for those who wonder where Hillary Clinton or Bernie Sanders are on the Democrats’ website, be aware that the Democratic primary is not yet over and the party cannot take sides between candidates who are still vying for the nomination.

The GOP’s aversion to Trump isn’t limited to the GOP website. The highest ranking Republican in the U.S. government, Speaker of the House Paul Ryan, has said only that he will vote for Donald Trump, but has not given him an explicit endorsement. The most recent Republican presidents and nominees for president (George H.W. Bush, George W. Bush, John McCain, and Mitt Romney) have not endorsed Trump and will not even be attending the Republican National Convention. And at several state conventions the leaders of the party gave speeches on party unity that conspicuously left out any mention of Donald Trump. They include Gov. Scott Walker and Sen. Ron Johnson of Wisconsin, Sen. Ted Cruz, Carly Fiorina, and Gov. Greg Abbott of Texas, and South Carolina Gov. Nikki Haley.

The Republican Party website is not shy about promoting prominent members of their party when they want to. The website’s online store is offering for sale hot properties like Dick Cheney cowboy hats, Reagan/Bush ’84 coffee mugs, and my personal favorite, George H.W. Bush socks. But you can’t buy a Trump baseball cap or bumper sticker.

If you try really hard you can find some references to Trump by using the site’s search tool. Those references mostly come in the form of news stories or press releases. There is nothing overtly promoting his candidacy or seeking support for his election. They aren’t even using him for fundraising. That speaks volumes about how the party feels about the choice made by their primary voters. In all likelihood, this should change as the campaign progresses, but the fact that the party is treating Trump like a ghost candidate now cannot be seen as anything but a rebuke.