The tragedy in Orlando last week has once again provoked the debate over access to assault weapons and the ease with which such destructive arms are attained by sick people with intent to do harm. It’s a fairly one-sided debate since the majority of Americans are in favor of common sense reforms such as universal background checks, prohibiting suspected terrorists from buying guns, and banning assault weapons. 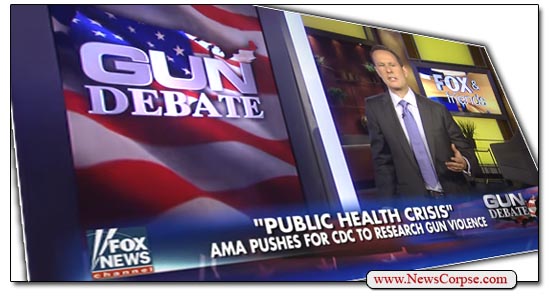 But leave it to Fox News to take the side of the NRA extremists who oppose any effort to make our country safer. With the exception of a couple of surprising and out of character commentaries by Bill O’Reilly and Gretchen Carlson, the consensus opinion of Fox News anchors and contributors is that guns should not even be included in the discussion about how to respond to mass murders by guns.

On Fox & Friends, for instance, the Curvy Couch Potatoes called in a member of the Fox News Medical A-Team to offer his “professional” opinion on the matter. Psychologist Keith Ablow is a blatantly political mouthpiece for right-wing propaganda and a confirmed Obama hater who long ago abandoned any credibility as a medical advisor. At the outset of the interview he was asked by co-host Brain Kilmeade whether gun violence is a disease or advancing a political agenda by the government. Ablow responded saying that…

“Of course gun violence isn’t a disease. This is part of the progressive agenda, alive and well at the AMA, the American Medical Association.”

Ablow went on to accuse the AMA of having a desire to “look into the problem of uncontrolled gun ownership.” Presumably, therefore, he is in favor of uncontrolled gun ownership, a position he shares with the world’s terrorists. In support of his argument he rattled off a stream of unrelated statistics about various causes of death in Argentina and Sweden that in no way addressed the very real and continuing problem in the United States. Then he lectured the AMA and the American Psychiatric Association on the need to “rebuild our mental healthcare system,” as if that was a novel idea that they hadn’t though of, or been working on for decades in spite of the opposition from conservatives like Ablow.

Ablow and Kilmeade also felt that it was important to note that homicides by guns were not among the top twenty causes of death in the U.S. That’s correct because health issues like heart attacks and cancer dominate the top ranks of fatalities. But their argument appears to suggest that the thousands of preventable deaths by gun violence are therefore irrelevant and unworthy of discussion. It’s a position that callously dishonors the victims and their families.

Perhaps the most striking part of Ablow’s remarks is that he touches on a cogent thought momentarily, but lets it fade off into his knee-jerk gun fetishism without acknowledging it’s importance. He said that…

“There are reasons for homicide and nobody knows how many of those acts would have taken place without guns.”

Exactly. The fact that nobody knows the answers to many of the questions surrounding the epidemic of gun violence in America is precisely the reason that organizations like the AMA and Centers for Disease Control should be studying the subject. However, Republicans in Congress, at the behest of the NRA, passed legislation that prohibits such studies. Ablow called the attempt to link guns to violence “foolishness,” but what’s more foolish than literally legislating away the quest for knowledge?

As usual, Ablow squeezed in a slap at President Obama by complaining that the AMA “are the people who championed Obamacare” (which, of course, has resulted in more Americans having access to affordable health care than ever before). He ranted that liberals have an agenda “to eat away at gun rights with medical research.” And after this brazenly political screed, Ablow had the audacity to demean those who advocate for more knowledge and greater safety by saying “that’s being political. So stop it. Call yourself the American Political Association and shut up.”

Shut up? That’s the advice of the “doctor” on whom Fox News relies for their “fair and balanced” discourse on matters of national importance? That’s how a “news” network approaches a debate on how to deal with serious and deadly issues? Fox News is doing what they always do with controversial issues. They consult a hardcore partisan to push their right-wing message without regard for the truth or the welfare of the nation.

Here’s a Primer on Keith Ablow:

For the record, Keith Ablow has been dispensing ludicrous psychological diagnoses for years. Some of his past adventures in malpractice include his charges that President Obama was waging psychological warfare on the American people, that Newt Gingrich was honorable for being unfaithful to multiple wives, accused Obama of wanting Ebola to spread in America, and my personal favorite, he actually praised the Unabomber’s sociopathic philosophy. These are a few of the reasons that may have contributed to his abrupt separation from the American Psychiatric Association. But who needs those medical establishment elitists when you have Fox News?