In the midst of a campaign season that has seen some startlingly ignorant remarks by the most fact-challenged assembly of Republican candidates and pundits, two of the party’s most laughable dolts are challenging each other for pinhead primacy. The face-off between Donald Trump and Sarah Palin may prove to be an epic contest by the legends of loony. 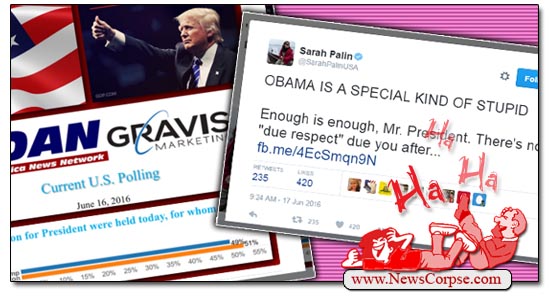 In one corner we have Donald Trump. The recognized leader in marathon lying, his versatility also makes him a contender for Stupidest Tweet.

In his relentless efforts to congratulate himself Trump posted a tweet giving thanks for the results of a poll that actually showed him losing to Hillary Clinton 49-51. As if that weren’t bad enough, what makes this particularly notable as epically dimwitted is that the poll is from the ultra-rightist TV network One America News (OAN) and was conducted by a blatantly biased pollster, Gravis Marketing. So even when his polls are conservatively skewed he’s losing, but in his ego-driven obliviousness he still finds it worthy of celebration.

Trump is drawn to polls that have no credible reputation and whose results are obviously bogus. In the past he has linked to polls that showed him leading with Latinos, with African-Americans, and with a higher favorability than Clinton in New York. But in this latest non-credible tweet he isn’t even leading. Polls that conduct accurate surveys of public opinion are giving Trump his worst numbers to date, including one that shows him with an unfavorable rating of 70 percent, the worst ever recorded by that poll.

In the other corner we have Sarah Palin, the word salad queen who thinks Africa is a country and whose “death panel” fantasy was PolitiFact’s Lie of the Year for 2009.

Palin’s entry in the Stupidest Tweet contest has a high degree of difficulty considering she is tackling head on the alleged stupidity of President Obama. Her tweet says that “OBAMA IS A SPECIAL KIND OF STUPID.” And right off the bat, she demonstrated her own lack of mental acuity by posting a broken link that led to a missing Facebook page. Undaunted, I navigated to her commentary on Facebook and found a screed lambasting the President for “Exploiting a sick, evil, ideological-driven attack on Americans to further your twisted anti-Second Amendment mission.”

Palin was outraged that Obama had the audacity to address the dangers of terrorists having easy access to assault weapons shortly after a terrorist killed 49 people and wounded 53 more with an assault weapon. She accused him of insinuating that the Orlando shooter represented all gun owners, which he never did. Then she demanded of him to “Forget your asinine gun control, do your job and engage in Islamic terrorist control.” Apparently she is unaware the Obama has been fully engaged in the fight against terrorism and has achieved significant progress while she and her ilk have done nothing but complain that he doesn’t say the three magic words, “radical Islamic terrorism” (as if that would change anything).

This Battle of the Lame-Brained promises to be an exciting spectacle as the election proceeds toward its November conclusion. And these demonstrations of Olympian idiocy will surely not be the last contenders. We have two worthy combatants who are determined to set new records for dumbf*ckery. So stay tuned for much more to come.

3 thoughts on “Twidiots: Donald Trump And Sarah Palin Vie For Stupidest Tweet Of The Day”