The pseudo-patriots at Fox News are constantly waving the Stars and Stripes as they espouse a philosophy of American Exceptionalism (aka American Supremacy). They consider themselves to be the palace guards of a near fetishistic nationalism. They pounce on President Obama for any slight that their imaginations perceive and berate those they feel have not been sufficiently deferential to their brand of jingoism. 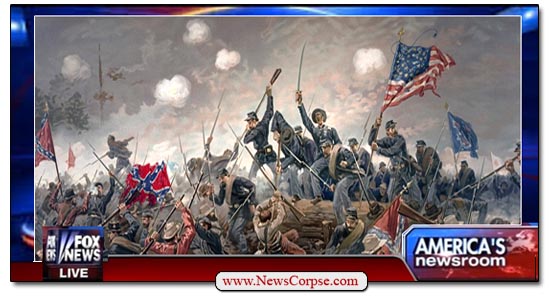 For some reason, however, when it comes to honoring the unity of the United States, Fox News is often less than loyal to the country. Yesterday’s vote in the United Kingdom on whether to remain in the European Union has brought out some of that anti-American fervor that is always just slightly below the surface of the Tea Party StormTrumpers at Fox News. Todd Starnes, host of Fox Radio’s News & Commentary program, was so exhilarated by the U.K.’s vote to leave the EU that he rushed to tweet his response to Brexit saying, “Hey Texas — did you see what the British just did? #freedom.”

Hey Texas — did you see what the British just did? #freedom

The unmistakable message of that tweet was that Texas ought to follow in the U.K.’s footsteps and secede from the U.S. It’s a message that isn’t particularly original. There has been a Texas secession movement (now being called Texit) going on for many years, led by groups like The Republic of Texas and the Texas Nationalist Movement. Former Governor Rick Perry was not averse to hinting at the idea while he was in office and running for president. But being advocated by a the host of a major “news” network is a new wrinkle.

Given a shallow analysis, one could find some compelling reasons to let Texas go, including the immediate loss of millions of right-wing crackpots and two wingnut senators. Governing the remaining forty-nine states would become noticeably easier without the largest red state mucking things up. Republicans would lose their largest source of electoral college votes.

But with closer scrutiny you would also have to be concerned about the millions of other rational, progressive Texans who would suffer undeservedly. What’s more, the conservative utopia about which the secessionists fantasize would not likely be forthcoming. For the past several years the population of the state has been trending more liberal with a growing community of Latino citizens. That’s probably not the demographic profile that the mostly white secessionists have in mind.

What Fox News and these anti-patriots fail to grasp is that there is no provision in the U.S. Constitution for secession. About a hundred and fifty years ago some southern states, including Texas, had sought to set up their own government separate from the United States. That turned out badly for them, and it wasn’t so great for anyone else either. It was the bloodiest war in the nation’s history. How Texas would achieve a separation today is not explained by the proponents.

For a Fox News host to advocate for what would be another bloody civil war is beyond irresponsible. It is insane. It’s the advocacy of once again pitting Americans against one another with no hope for successfully attaining their goal. It would result in untold fatalities and economic catastrophe as demonstrated by the response of the world’s financial markets today. Clearly there is very little optimism about the prospects for England’s future by those who are most affected by it.

Just the suggestion of pursuing Texit inflames the same sort of bigotry and division that has fueled the campaign of Donald Trump who, after an embarrassing moment when he revealed that he didn’t know what Brexit is, he came out in favor of it. He literally announced his support for one of the most consequential events in history just moments after saying “I don’t think anybody should listen to me because I haven’t really focused on it very much.” And that pretty much sums up the low level of thought that has gone into the issue by Trump and his ilk. It’s an embrace of ignorance that is both mind boggling and frightening. And it is being furthered by irresponsible propagandists on Fox News.

9 thoughts on “Fox News Host Uses #Brexit Vote To Call For A New Civil War In The U.S.”