Donald Trump has been boasting about his ability to create jobs despite never having explained exactly how he would do so. Well, now it appears he may have created one at CNN for the campaign manager that he fired just a few days ago. 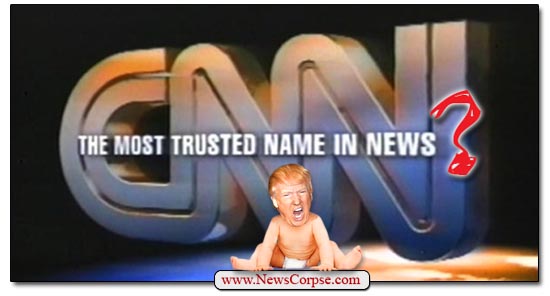 Corey Lewandowski was escorted out of Trump Tower by security guards when the campaign decided that his services were no longer needed. He was criticized for the campaign’s negative and hostile tone, for failing to raise money, for not building a campaign infrastructure, and for infighting between various factions within the Trump camp. Recent polls showing Trump losing to Hillary Clinton also weighed on Lewandowski’s shoulders as he battled with the Trump kids and strategist Paul Manafort for control of the campaign.

Now CNN has rewarded Lewandowski with a job and a paycheck as a political commentator for the network. It’s not as if CNN didn’t already have a stable of partisan Trump sycophants on the air every day. Jeffery Lord, Scottie Nell Hughes, Kayleigh McEnany, among others have been shilling for Trump on CNN for months. And that’s in addition to the frequent appearances by Trump spokeswoman Katrina Pierson and Trump himself.

There are few, if any, examples of a news network scooping up a high-level campaign operative in the midst of an election, particularly one with the resume of Lewandowski. This is the first campaign that Lewandowski has ever managed, if you want to call it that. None of the traditional trappings of a campaign were evident in his work. He maintained a tiny staff of insiders and relied on free media for attention. He presided over a candidate who avoided substantive debate while resorting to childish insults and name-calling to bring down his opponents.

Lewandowski also had a terrible relationship with the press. While Trump was calling them sleazy and scum, and fantasizing about killing them them, Lewandowski was herding them into pens like cattle and threatening them if they were disobedient. He revoked the press credentials of people or organizations he didn’t like, including the Washington Post, BuzzFeed, the Huffington Post, Fusion, Univision, the Des Moines Register, and the New Hampshire Union Leader.

Lewandowski was the subject of an unprecedented meeting between the television news networks (including CNN) to address what they considered “harsh and restrictive behavior.” In one case Lewandowski told another campaign staffer “Hey: Tell Noah [Gray of CNN], get back in the pen or he’s f—ing blacklisted.”

And then there was the incident when Lewandowski was alleged to have physically assaulted a reporter from the conservative Breitbart News website. Michelle Fields claimed that Lewandowski had grabbed her by the arm and nearly threw her to the ground. He was briefly under indictment for the assault, but the authorities decided not to prosecute.

This is the caliber of man that CNN has just chosen to provide analysis of the election. He is overtly hostile to the press of which he is now becoming a part. His peers in the business are both stunned and outraged that CNN would grant this cretin one of a very few on-air positions available.

What’s worse, it is well known that Donald Trump requires his people to sign a nondisclosure agreement that prohibits them from saying anything negative about Trump, his businesses, or his family. So how can CNN justify hiring a commentator who is contractually bound to bite his tongue if anything unflattering to Trump occurs during the campaign? He’s a commentator who can’t comment. What does that say about a free press at CNN?

Update: The backlash is growing as a “near revolt” at CNN is reportedly under way:

“CNN is facing a near internal revolt over the Corey hiring,” said a TV insider, who described many in the newsroom as “livid.” “Female reporters and producers especially .?.?. They are organizing and considering publicly demanding” that Lewandowski be let go.

6 thoughts on “WTF Are They Thinking? CNN’s New Hire Is Trump’s Ex-Manager And Press Abuser”